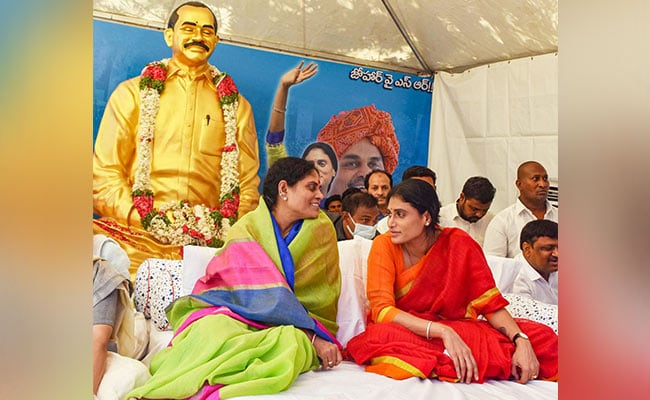 YS Sharmila at a hunger strike, demanding jobs for unemployed youth in Telangana.

YS Sharmila, the sister of Andhra Pradesh Chief Minister YS Jagan Mohan Reddy, was forcibly moved by Telangana Police on Thursday evening, during her protest at a park in Hyderabad.

Ms Sharmila, a political entrant in Telangana and the daughter of former chief minister of undivided Andhra Pradesh, had announced that she would announce her political party and go on a rally from July 8, her father’s birth anniversary.

She had sat on the protest at Hyderabad’s Indira Park, demanding that the K Chandrashekar Rao government fill 1.91 lakh vacancies for unemployed youth. She was joined by her mother and various followers from across the state. This has been a hot political issue in Telangana.

The aspiring politician is now continuing her hunger strike at Lotus Park, another location in Hyderabad.

Ms Sharmila said she will stay continue her hunger strike till her supporters are released. “One day, I will become the Telangana Chief Minister,” she is reported to have said.

Jagan Reddy has distanced himself from his sister’s political plans in Telangana.

The name, logo, flag and ideology of Ms Sharmila’s party would be unveiled on July 8. Assembly elections are due in Telangana in 2023.

There has been speculation about who Ms Sharmila may help or hurt, politically. It is possible that Reddys, who were politically influential in Telangana during the Congress rule, could rally around her. She may also attract the SC/ST vote, other than those who admired her father.

The Telangana Rashtra Samithi (TR)  is the dominant political force in Telangana. The Congress has weakened, and the BJP is trying to find a political foothold in what it sees as a political vacuum in the opposition space.