Woman Screams As Snake Lunges Towards Her In Heart-Stopping Video 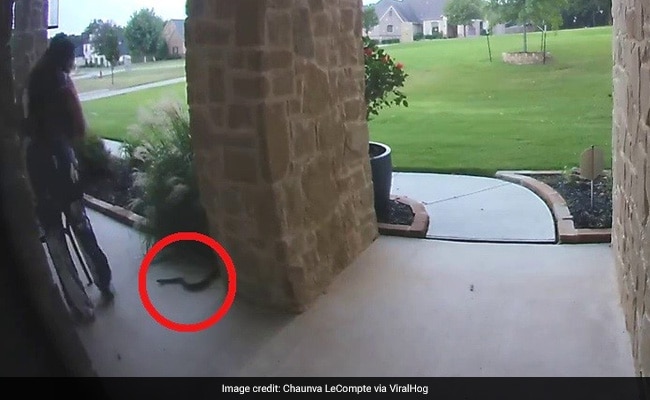 A woman from Texas has shared how she “nearly died” of fright after a snake lunged at her as she walked out of her house. Chaunva LeCompte was walking outside to sit on her front porch when the snake jumped at her out of some bushes, surveillance footage shows. Ms LeCompte, a photographer, was filmed screaming at the top of her voice and running back inside.

The incident occurred on Sunday in Ms LeCompte’s Burleson home.

“I was walking outside to sit on the front porch with my mother as she was leaving,” she explained. “To my surprise there was a snake hiding in the bushes waiting for me.

“He jumped out at me and I near died,” Ms LeCompte said

The video, captured by a Ring security camera, shows Ms LeCompte walking out of her house, phone in hand. She had not taken more than a couple of steps, however, when the snake slid out of some bushes and landed right at her feet. The terrified photographer was heard screaming as she rushed back into the house. The snake, meanwhile, retreated into the vegetation.

Ms LeCompte shared the video on her Facebook page, where people branded it “horrifying”.

“I would have dropped dead!” wrote one Facebook user. “Oh no!! It seemed like it came right at you. Glad you’re okay,” another said.

There were also many of those who found the video funny and dropped laughing face emojis in the comments section. “And I’m still laughing. I’m so sorry,” one Facebook user confessed, while another said, “We can laugh now but I would’ve done the same.”