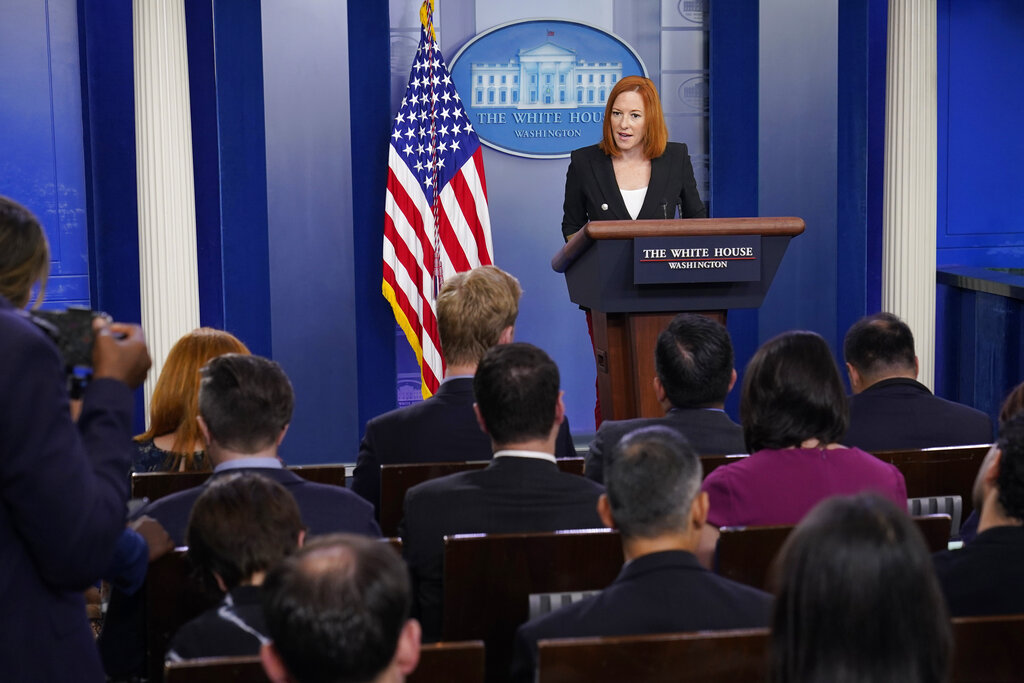 The White House has had “regular contact’ with Fox News over vaccine coverage, but the administration isn’t singling the news network.

Joe Biden’s administration escalated their efforts last week to combat misinformation about vaccines, but that effort has focused in large part on the role of Facebook and other social media companies, not on what conservative hosts like Tucker Carlson and Laura Ingraham have said on their nightly shows.

On Tuesday, White House Press Secretary Jen Psaki was asked to comment on a CNN report that the administration had had “high level” regular conversations with Fox News over its vaccine coverage.

Psaki suggested that the conversations were with all the networks and media outlets, not just Fox News.

“I think you all know we’re never shy when we have an issue with a story.  So that’s really the frame we’re looking at here,” Psaki responded.

“So we understand also the importance of reaching Fox’s audience about the COVID-19 vaccines and their benefits,” she added. “And like we are with all of you here today, we of course are in regular contact, and we also make efforts to have officials out on a range of networks to talk about COVID-19.  We don’t see it as a partisan issue.  We don’t see vaccines as a political issue.  It’s an issue about keeping Americans safe.”

A Fox News spokesperson later said in a statement, “CNN’s reporting is inaccurate. There have been no high level conversations between Fox News Media and the White House regarding our coverage. We had one routine briefing with the White House in early May on vaccination rates and our DC bureau personnel are regularly in touch with them on a variety of issues, as is the case with every other network.”

CNN’s Kaitlan Collins, who first reported the talks, later clarified, “I previously described the levels of contact between the White House & Fox News on pandemic coverage as “high level” but both sides have subsequently disputed the discussions were. The WH held a network-specific briefing between Fox News and officials to discuss coverage in May.”

The earlier report noted that White House officials often reach out to television networks and other outlets about their coronavirus coverage, but the Fox outreach was notable given its past coverage. Fox’s statement to NYT: https://t.co/QuOa7eNRrJ

As Covid-19 cases rise among the unvaccinated, there has been a renewed focus on misinformation, with polls showing higher rates of skepticism toward the shots among those on the right vs. the left, and the role that conservative commentators have played in feeding public doubt and mistrust.

On a recent show, Tucker Carlson suggested that the alarm D.C. officials have over the unvaccinated “make you think” that “maybe none of this is really about Covid. Maybe it’s about social control.” Laura Ingraham, meanwhile, has railed against Biden administration plans to go door-to-door to encourage people to get the vaccine, calling it “creepy stuff.” She also has featured a number of guests skeptical of the need for the shots . Last week, in a segment with the chyron, “The Left’s Constant Power Grab,” Ingraham featured a guest, Peter McCullough, who warned of vaccinations of anyone below the age of 30.

Fox News’ P.R. team has defended their coverage of vaccines, noting that network personalities made a PSA from February featuring Fox News personalities that encouraged viewers to get the vaccine, while Harris Faulkner held a town hall later  that month. A Fox News spokesperson also cited instances where Carlson and Ingraham have spoken in favor of getting the vaccines, as when Carlson said in April that “this show has been pretty adamantly pro-vaccine from the first day and remains that way and because we do support science and do support vaccines and have faith in American science, we would like really simple questions answered.” In May, Ingraham featured former governor Chris Christie who said that when people get the vaccine “we take our lives back, and that’s what we need to do.”

On Monday, Sean Hannity said on his show, “I believe in science, I believe in the science of vaccinations. But I’m not a doctor. I’ve been pressured to tell people what to do.  I’m telling people this: I want my audience to live. I don’t want anyone dying from this thing. It’s dangerous, take it seriously.”

Yet Hannity’s segment was preceded by one in which he chided universities that impose vaccine mandates, and followed by one in which he interviewed a student who declined to get vaccinated because of the side effects she had from a different type of shot she took for Guillain-Barre syndrome. “I truly believe the vaccine is not meant for me,” she said. “And if you feel it is necessary to get vaccinated then by all means, I have nothing against you, but I do not believe that those with medical exemptions should be pushed to have this vaccine.”

Meanwhile, Newsmax highlighted an op ed from its CEO, Chris Ruddy, in which he praised the Biden administration effort and wrote that the network has “strongly advocated for the public to be vaccinated.”

“The many medical experts that have appeared on our network have been near unanimous in support of the vaccine,” Ruddy wrote. “I myself have gotten the Pfizer vaccine.”

Last week, a Newsmax anchor, Rob Schmitt, questioned whether vaccines were “against nature.” The network then distanced itself from the remark.

The Surgeon General last week issued a report outlining a series of recommendations to news outlets to counter misinformation, but he did not single out individual media entities.

On State of the Union on Sunday, host Dana Bash interviewed Vivek Murthy and played clips from Carlson, Ingraham and Schmitt. “President Biden accused social media platforms of killing people. Do you think conservative media, like Fox News, are doing the same. Are they killing people too with rhetoric like you just heard?”

Murthy, who also appeared on Fox News Sunday last weekend, responded, “I think all of us, including the media, including individuals, health professionals, have a responsibility to share the truth about health as science dictates, as science informs us. Unless we do that, unless we are honest about the consequences of our communication with people, unless we are rigorous that what we communicate is actually sourced from science and not from opinion on critical issues like the vaccine, then we are ultimately going to put people at risk.”