Home Watch Money Heist and chill! Jaipur based firm's awesome offer for its... 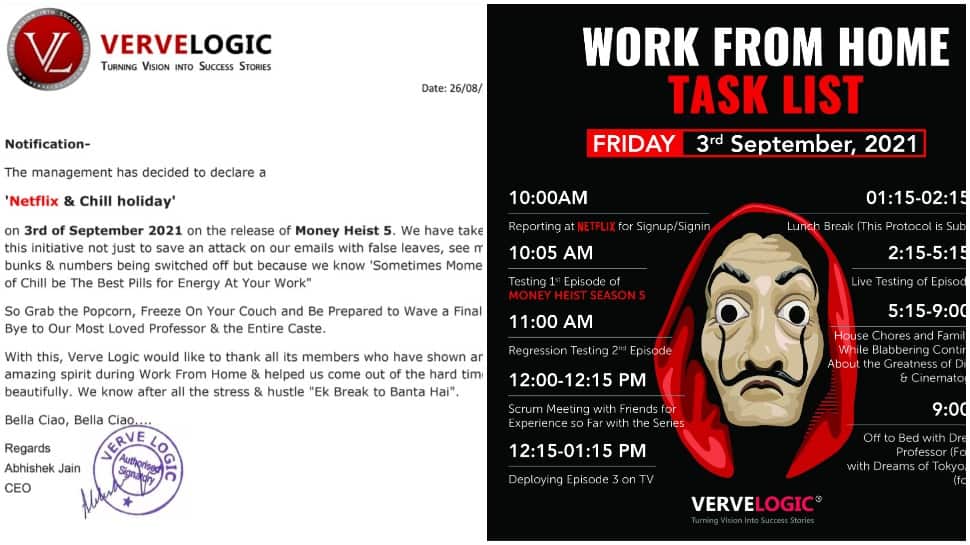 Jaipur: At a time when the popular Netflix show `Money Heist, soon to come up with its fifth episode, has created a lot of buzz across the globe, a Jaipur-based firm named Verve Logic has declared a holiday on September 3, announcing it as `Netflix and Chill Holiday as the show releases on the same day.

The CEO of the company, Abhishek Jain, also thanked his employees for the hard work they put in during the Covid-19 pandemic.

`Money Heist` is a Spanish thriller which has developed a lot of excitement all over the world.

In his message to his employees on social media, the Verve Logic CEO said that “it is okay to take a break every once in a while”.

Have Been Going Over the Love We have Received.!
Yes it is real and we are absolutely happy to announce an off on 3rd September naming it to be “Netflix & Chill Holiday” on the release of final season of #MoneyHeist @NetflixIndia– Please don’t end this one! “Kehdo Ye Juth Hai” pic.twitter.com/M9RmFbZPOi

Taking to social media, Jain said, “We have taken this initiative not just to save an attack on our emails with false leaves, see mass bunks and numbers being switched off but because we know sometimes `Moments of Chill be the Best Pills for Energy at Work`.

“So grab the popcorn, and be prepared to wave a final bye to our most loved professor and the entire caste. With this, Verve logic would like to thank all its members who have shown an amazing spirit during work from home and helped us come out from hard times beautifully. We know after all, `Ek Break to Banta Hai`.”

He ended his mail by saying, “Bella Ciao, Bella Ciao.”

Speaking to IANS, Jain said, “People are actually looking forward to a fun holiday. I did hear about the excitement about the new show and decided to follow the craze as people have been working from home continuously and they did not get any single day off. That`s why we declared the fun holiday.”

NEW DELHI: Clinching the political process in Punjab within two days by putting a Dalit in the chief minister's post is a bold...
Read more
Top Stories

<!-- -->Five others are still missing. (Representational)Beijing: At least 10 people were killed and five others listed missing after a passenger ship overturned...
Read more