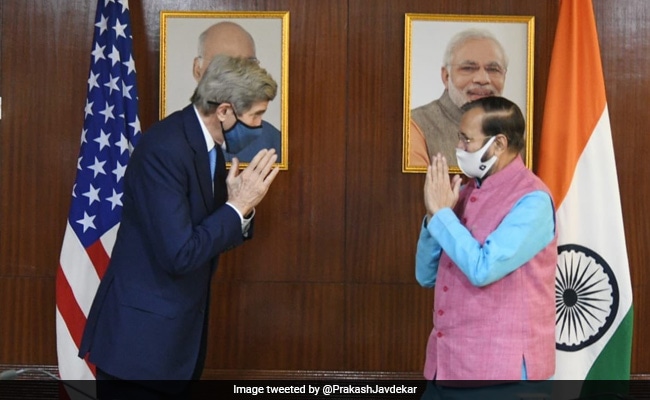 John Kerry is the second top official of the Biden Administration visiting India.

Had an engaging and fruitful discussion with Mr.@JohnKerry, Special Presidential Envoy for Climate. We discussed a range of issues including #ClimateFinance, joint research and collaboration, etc, Mr Javadekar, who led an eight-member Indian team at the meeting, tweeted.

Had an engaging and fruitful discussion with Mr. @JohnKerry, Special Presidential Envoy for Climate.

We discussed a range of issues including #ClimateFinance, joint research and collaboration etc.@PMOIndia@ClimateEnvoy@UNFCCCpic.twitter.com/SaIij2bCz2

Mr Kerry was accompanied by a seven-member US delegation in the talks, an environment ministry official said.

Mr Kerry is on a four-day visit to India, from April 5 to April 8, during which he will meet representatives from the Union government, the private sector and NGOs.

This is also Mr Kerry’s first visit to India as the US Special Envoy for Climate Change. In January, the Biden administration had re-joined the Paris Agreement.

The visit aims at consultations on increasing climate ambition ahead of US President Biden’s Leaders’ Summit on Climate scheduled for April 22-23 and the COP26 meet to be held later this year.

US President Biden has invited 40 world leaders, including Prime Minister Narendra Modi, to a US-hosted virtual summit on climate to underscore the urgency and the economic benefits of stronger climate action.

This will be the second time PM Modi and US President Biden will be together at a virtual summit after last month’s Quad meeting.

“As one of the world’s largest economies and a global leader in science and innovation, India is a critical part of the solution to the climate crisis. We see India as an important partner on future clean energy research, development, and deployment, not least because of their successful domestic agenda in this area,” a spokesperson at the US Embassy had said on Monday.

A key focus for our administration is supporting and encouraging India’s decarbonization efforts through clean, zero, and low-carbon investment, and supporting India in mitigating its fossil energy use,” he had said.

According to the International Energy Agency (IEA), India is the third-largest global emitter of carbon dioxide, after China and the US, despite extremely low per capita CO2 emissions.