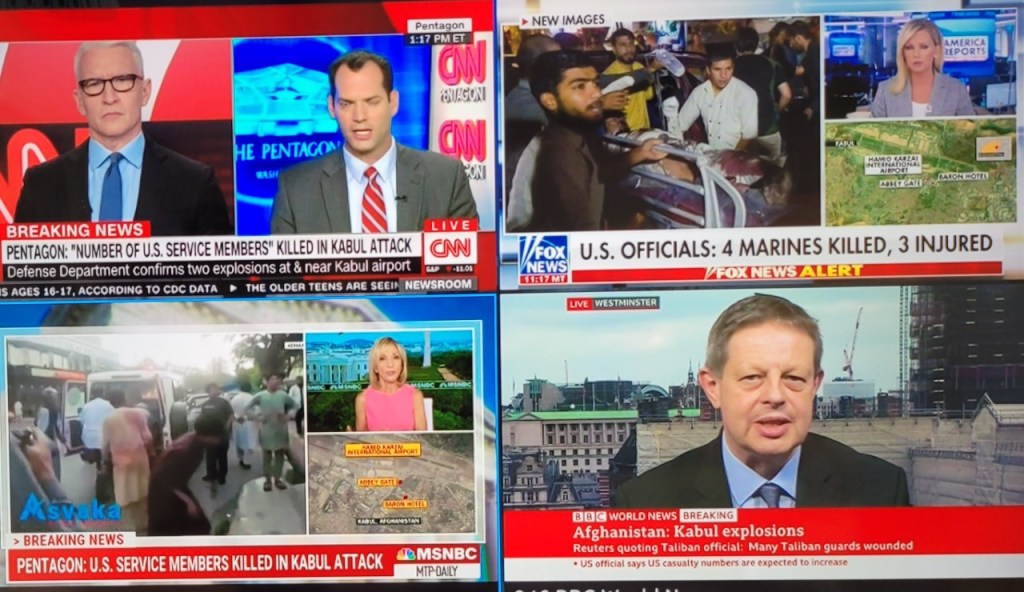 Networks mobilized on Thursday to cover what was described as a “complex” attack outside the Kabul airport, showing pictures and video of the carnage that killed a number of U.S. service members and left scores of others injured.

As coverage focused on the attack and the options left for President Joe Biden, the focus shifted when the Pentagon announced that “a number of U.S. service members” were killed and dozens of others wounded, in addition to Afghan nationals.

Taking the feed from MSNBC, NBC proper was the only broadcast network to cover the news coming out of Afghanistan for most of the morning. At 10:28 AM PT, ABC News broke into a repeat of The View with a special report fronted by anchor David Muir on the American deaths in the attack. CBS stayed with The Price Is Right, but the network broke into regular programming for a special report on the attacks earlier in the day. Fox News reported that four service members were killed.

“Our thoughts and prayers go out to the loved ones and the teammates of all those killed and injured,” said Pentagon spokesman John Kirby.

The attack appeared to be directed at a densely populated area outside the Abbey Gate at the airport, where Afghan civilians had gathered in a frenetic effort to flee the country and obtain passage on U.S. military evacuation flights, which has been airlifting Americans and Afghan allies ahead of an Aug. 31 deadline. CNN reported that U.S. officials believe that ISIS-K was behind the attack, after warning over the past few days of an imminent terrorist threat outside the gates.

“We can confirm that the explosion at the Abbey Gate was the result of a complex attack that resulted in a number of US & civilian casualties,” Kirby said earlier. “We can also confirm at least one other explosion at or near the Baron Hotel, a short distance from Abbey Gate. We will continue to update.”

On CNN, Anderson Cooper began anchoring at 9 AM PT, and the network initially ran blurry video footage of bodies in a sewage canal outside the gate, one of the main entrances to the airport. The network later ran cell phone video of the aftermath, with Cooper warning that that the images were not going to be blurred. MSNBC and Fox News also ran images, warning viewers of the graphic nature.

CNN’s Nick Paton Walsh, reporting from Doha, Qatar, said that the attack appeared to be directed at maximizing casualties, given the flood of people gathered at the airport gates. “This desperation is growing,” Walsh said of Afghan nationals who have been struggling to get out of the country.

The attack only added to what has been a chaotic situation since the Taliban took control, with a terror motive to extract maximum bloodshed. “Covering Afghanistan for the past two decades, it has had this extraordinary ability to shock and surprise you,” he said.

On Fox News, anchor Bill Hemmer did a phone interview with an Afghan man at the Kabul airport who said that he witnessed the explosion.

“There was an explosion that happened inside the crowd,” said the man, who was identified as Carl. “A lot of people got hurt and I got a baby girl. She was 5 years old she died right in my hand. I don’t know what exactly what is going on over there. I think some of the Americans got hurt, too. And so people are running around.”

The White House postponed much of the president’s schedule for the day, as President Joe Biden gathered in the Situation Room. A number of cable news commentators said that the situation, with U.S. fatalities, was a worst case scenario for the administration, which has been scrambling to evacuate Americans and allies, amid scathing criticism that they failed to plan for the chaos of a withdrawal and the possibility of the collapse of the Afghan government.

H.R. McMaster, former national security adviser under President Donald Trump, appeared on a number of outlets including Fox, MSNBC and BBC World. He slammed Biden for “surrendering to a terrorist organization,” as well as Trump for forging the withdrawal agreement with the Taliban.

The big reveal in the Reeves tweets was a look at Zoë Kravitz as Selina Kyle, aka Catwoman. The brief look, sans costume,...
Read more
Hollywood

The Food and Drug Administration will delay its decision on authorizing Moderna Inc’s vaccine for adolescents while it examines whether it leads to...
Read more