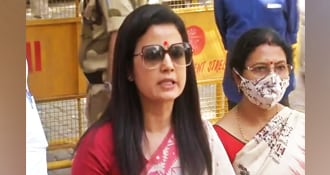 Leaders of Bengal’s ruling Trinamool Congress, riled over Prime Minister Narendra Modi’s taunt to Mamata Banerjee on whether she wants to contest from another seat,  gave a decided negative on Thursday, albeit off the record. What infuriated party MP Mahua Moitra was something else.

“There is something we have in Bengal called ‘rock-er chhele‘, which means a street-side fellow who sits on a wall and who basically calls out to every lady walking past, saying “Diddi, ei diddi“. This is Prime Minister doing this,” Ms Moitra told NDTV on Thursday.

Asked if she meant it was a catcall, Ms Moitra shot back, “Don’t take it out of context. Please. But doesn’t it sound like that? What does it sound like?”

PM Modi had jeered at the Chief Minister during a rally in Uluberia on Thuesday evening as the second phase of polling in the state was in progress.

With all eyes on Nandigram, where Mamata Banerjee has taken on her protege – turned arch enemy Suvendu Adhikari who is representing the BJP, the Prime Minister had sneered at her chances of a victory.

Mahua Moitra — who joined the Trinamool Congress after a career as an investment banker — later tweeted, “Contesting from second seat?’ PM Modi jabs Mamata Banerjee. Yes Mr. Prime Minister, she will. And it will be Varanasi! So go get your armour on.”

Yes Mr. Prime Minister, she will.
And it will be Varanasi!

So go get your armour on.

The fiery first-time MP from Krishnanagar has made headlines with her outspoken remarks inside parliament and out.

Last month, the government contemplated action against her over her remarks in the Lok Sabha on a former Chief Justice of India.

In a defiant tweet, Ms Moitra said, “It would be a privilege indeed if a breach of privilege motion is initiated against me for speaking the truth during India’s darkest hour”.

After the government dropped the idea, she told NDTV, “The standard of national discourse has become such that speaking the truth is seen as a revolutionary act”.