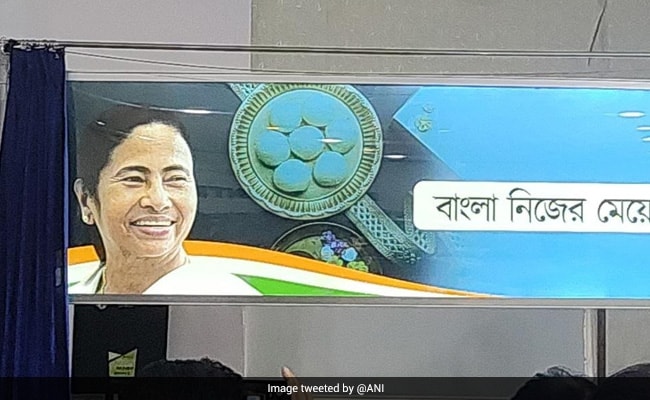 “The line states a fact… this is what the people have been telling us,” Derek O’Brien told NDTV

The Trinamool Congress on Saturday launched its slogan for the 2021 Bengal Assembly election. The slogan is “Bangla Nijer Meyekei Chaye“, which translates as “Bengal wants its own daughter”, and pitches Chief Minister Mamata Banerjee in that role. Ms Banerjee is usually referred to as “didi“, which means ‘elder sister’ in Bengali.

With the slogan in place, the ruling Trinamool has also highlighted what was unsaid.

The party’s campaign in this election has been about fighting “bohiragato” or “outsiders”, while also retaining its most faithful vote bank – women. In all her campaign speeches Ms Banerjee has reached out to female voters and asked them to take on “goons from outside”.

Shortly after the slogan was released Abhishek Banerjee, who is the Chief Minister’s nephew, addressed voters in north Bengal’s Nagrakata, and made an emotional appeal.

“Do you want a daughter of Bengal to surrender before Delhi? I want to ask my mothers and sisters here… do you want Bengal’s daughter to surrender Bengal’s pride, worth and faith before Delhi? Some people from outside are trying to finish off Bengal’s culture? Do you want these people to do that?” Mr Banerjee, who is the Lok Sabha MP from Diamond Harbour, asked.

“Bohiragotoder dao biday, Bangla Nijer Meyekei Chaye,” he said in Bengali, which translates as “Send away the outsiders as Bengal wants its own daughter”.

Mr Banerjee also attacked the BJP over the controversial ‘Jai Shri Ram‘ slogan and said: “We will make you say ‘Jai Hind‘ and ‘Joy Bangla‘. I promise you we will make them say ‘Jai Siya Ram‘”.

That particular comment was a direct retort to Home Minister Amit Shah, who last week declared that Mamata Banerjee “will begin chanting ‘Jai Shri Ram‘ by the time elections are over”.

In what is set to be a battle of slogan as much as one of development issues, sources have said the Trinamool’s was created to present the Chief Minister as someone who belongs to the people of Bengal, while simultaneously casting the opposition as being controlled by outsiders.

The slogan was launched at the Trinamool HQ in Kolkata in the presence of senior leaders like Subrata Mukherjee, Subrata Bakshi, Partha Chatterjee, Kakoli Ghosh Dastidar, Sukhendu Shekar Roy and Derek O’ Brien.

Speaking to NDTV, Mr O’ Brien said: “The Chief Minister has been around for ten years now. She is looking at a third term… and she will be sworn-in in May after she is blessed by the people. The people will interpret and absorb the slogan. We will take this simple slogan to the people.”

“The line states a fact… this is what the people have been telling us. How this will be interpreted and what the opposition will do is for them to chase. We have got this positive, honest and direct message from the heart,” he added.

When asked if the slogan is an extension of the party’s message to keep “outsiders” at bay, the Rajya Sabha MP would only say: “You are free to interpret it anyway you like. I don’t like to write a poem and then write an annotation behind the poem. Feel free to interpret it.”

Mira Rajput says her husband Shahid Kapoor is a perfectionist while she is a very relaxed person. The lifestyle influencer talks about how...
Read more