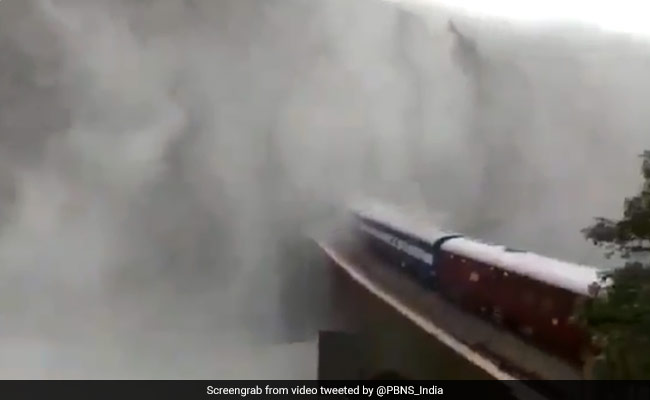 Train passing close to Dudhsagar waterfall in Goa was stopped due to heavy rainfall.

A train passing near Dudhsagar waterfall in Goa was stopped due to heavy rain. In a video shared by the Railway Ministry, the train is seen coming to a halt after the waterfall starts releasing a large volume of water on the Mandovi river. During heavy rain in monsoon in western India, the Dudhsagar falls become visible from the nearby rail line that connects Goa with Bengaluru.

The increased flow of the Dudhsagar falls can also be seen in the video shared by the Railway Ministry.

During monsoon, the Dudhsagar falls or ‘Sea of Milk’ are fed by rain, resulting in a huge gush of water. The area around Dudhsagar falls is covered with deciduous forests and has a very rich biodiversity.

Dudhsagar falls is amongst India’s tallest waterfalls with a height of 310 metres and an average width of 30 metres.

Heavy rainfall continued in parts of Konkan and Goa with the India Meterological Department (IMD) predicting substantial rainfall activity over the next three days. The weather office also said that heavy to very heavy rainfall is likely on July 30 and 31. Orange alert has been issued by the IMD for these days.