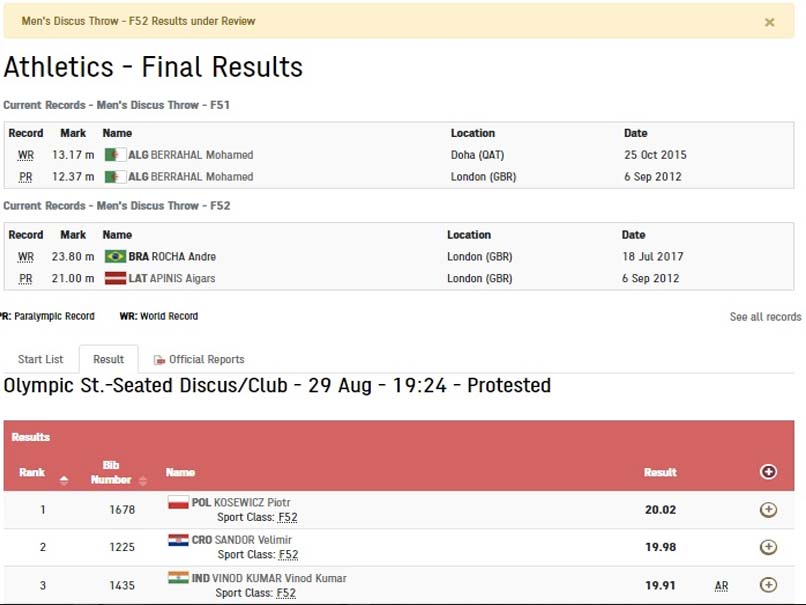 Left bed-ridden for close to 10 years after falling off a cliff, Indian discus thrower Vinod Kumar scripted an astonishing tale of resilience by clinching a bronze medal in the men’s F52 event of the Paralympics but a protest has put his celebrations on hold for now. The 41-year-old BSF man, whose Army man father was injured during the 1971 Indo-Pakistan war, produced a best throw of 19.91m to finish third behind Piotr Kosewicz (20.02m) of Poland and Velimir Sandor (19.98m) of Croatia. However, the result has been challenged by some other competitors, who have objected to his classification in the F52 category. The grounds of the protest are not clear as the process was completed on August 22.

“Results of this event are currently under review due to classification observation in competition. The Victory Ceremony has been postponed to the evening session of 30th August,” read a statement from the Games organisers.

Para-athletes are classified depending on the type and extent of their disability. The classification system allows athletes to compete those with a similar level of ability.

The Haryana-athlete’s performance was an Asian record and gave India its third medal of the ongoing edition, which happens to be his debut.

Vinod injured his legs while training after joining the BSF, falling off a cliff in Leh that left him bed-ridden for close to a decade during which he lost both his parents.

His condition improved around 2012 and his tryst with para-sports began after the 2016 Rio Games. He began training at the Rohtak’s Sports Authority of India centre and picked up a couple of national bronze medals, justifying the old adage that where there is a will, a way is not too far.

His first international outing happened in 2019 when he participated in the Paris Grand Prix before finishing fourth in the world championships the same year.

Tabraiz Shamsi was added to the Rajasthan Royals squad as a replacement.© TwitterRajasthan Royals resume their IPL 2021 campaign with a crunch clash against...
Read more
Sports