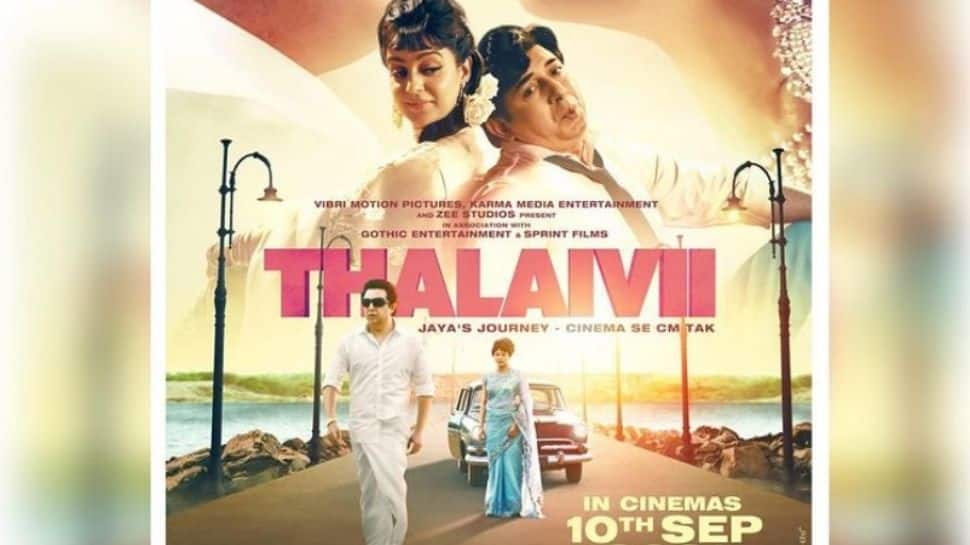 New Delhi: Bringing to the screen the unspoken relationship between Jayalalithaa and MGR played by Kangana Ranaut and Arvind Swamy respectively, Thalaivii sheds light on the iconic pair on screen as well as off screen as they replicate the original songs of the duo for this romantic song in the film.

In the romantic song ‘Teri Aankhon Mein’, paying a tribute to the innumerable blockbusters of the legendary South Indian superstars, the makers of Thalaivii have recreated four iconic original songs featuring the duo- Kannae Kaniyae and Enna Porutham from Rasiya Police 115 (1968), Ninathathai Nadathiyae from Nam Naadu (1969), Ninathen Vanthai from Kaavalkaaran (1967).

From replicating the looks to the movements on screen,  Kangana has attempted to resemble the nuances from original songs to the closest, paying her ode to the most loved and respected cinematic legends of Tamil Nadu.

Talking about the same, Kangana said, “Jaya Amma’s songs are significant because they are part of pop culture. This song is an amalgamation of those tracks. Jaya Ma and MGR gave 60 to 70 songs together. They worked together for decades, but we had to crack it in the span of four days. In a day, I would go through several looks and hairstyles. The two forces of Tamil cinema created fireworks on screen, and I wanted that magic to be authentic.”

Revealing the experience of shooting the song while also gearing up for the latter part of the film, Kangana said, “In her younger days, Jaya Amma had an hourglass body. But we were on the brink of shooting the second hour of the film. My director took it upon himself to make sure I was well-fed. His mother’s handmade meals came in three tiffins.”

The actress had gained almost 20 kgs to portray Jayalalithaa in the latter part of her life.

The teaser of the song was released on Friday, while the song releases on Monday.

Earlier, the makers released the trailer of the film which highlighted the varied phases of Jayalalithaa’s life played by Kangana Ranaut. From the glorious years at cinema to her relationship with MGR as mentor, protector, lover to the revolutionary political Career phase in Tamil Nadu, Thalaivii unfolds the untold reality behind the life of Jayalalithaa.

Makers earlier revealed the new release date of the film ensuring a theatrical release as they strongly believe the correct way to pay homage to Jayalalithaa would be to bring her back to the silver screen.

Directed by Vijay, Thalaivii, presented by Vibri Motion pictures, Karma Media Entertainment and Zee Studios in association with Gothic Entertainment and Sprint films has been produced by Vishnu Vardhan Induri and Shailesh R Singh and Co produced by Hitesh Thakkar and Thirumal Reddy with Brinda Prasad as the Creative Producer. Thalaivii is set to release in theatres worldwide in Hindi, Tamil and Telegu by Zee Studios on 10th September, 2021.

NEW DELHI: WhatsApp is reportedly working on a new feature which will give respite to its users from abusive and spam messages. This...
Read more