Tamil Nadu Has Voted For Change 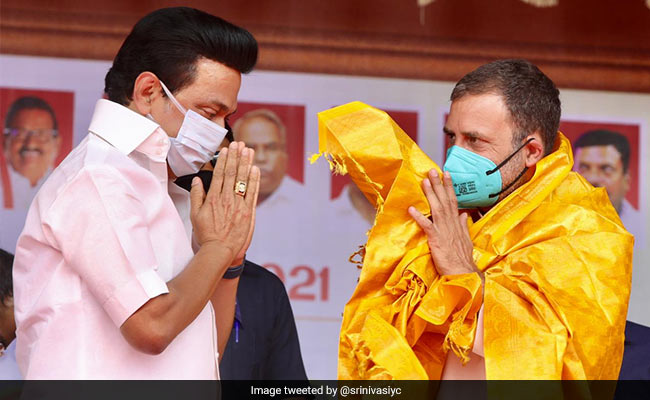 The Congress is part of the DMK-led alliance in Tamil Nadu.

Congress leader Rahul Gandhi on Sunday congratulated his ally MK Stalin, whose DMK party seemed all set to win the Tamil Nadu elections, defeating the ruling AIADMK and the BJP.

“Congratulations to Shri MK Stalin for the victory. People of Tamil Nadu have voted for change and we will, under your leadership, prove to be a confident step in that direction. Best wishes,” he tweeted.

Congratulations to Shri MK Stalin for the victory.

People of Tamil Nadu have voted for change and we will, under your leadership, prove to be a confident step in that direction.

Tamil Nadu appeared set for a new government with the DMK ahead in 121 seats and its partner Congress in 16, ruling AIADMK trailing with leads 80 seats in the 234-member assembly. Victory in 118 will ensure a simple majority.

Both the Dravidian parties went into the election without their stalwarts, J Jayalalithaa for the AIADMK and M Karunanidhi for the DMK.

Tamil Nadu was also the lone bright spot for the Congress where the DMK-led opposition alliance, of which it is a part, looked in a position of power to trounce the AIADMK-BJP coalition.

In the other states, including West Bengal and Kerala – from where Mr Gandhi is an MP – it was a story of more losses underscoring the party’s fading electoral significance.

Though the Election Commission had banned victory roadshows and vehicle rallies, crowds of jubilant supporters of various parties could be seen celebrating in various places in violation of Covid norms.

The drumbeats of victory came in the backdrop of an election which will be remembered for vast, crowded rallies – with most people without proper masks — amid the pandemic.