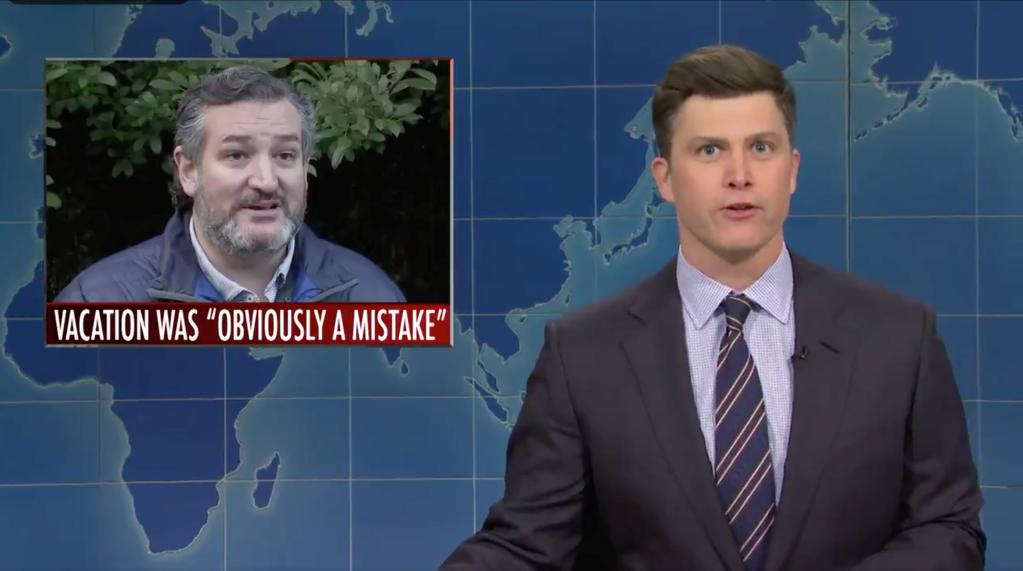 Saturday Night Live went all-in on Ted Cruz, eviscerating the Texas Senator for flying to sunny Cancún for a family vacation while his state was paralyzed by a deadly winter storm.

Cruz was played by Aidy Bryant in the Cold Open, delivering a non-apology apology.

Jost blasted Cruz for blaming his daughters over the decision to go to Mexico.

“If you think it’s bad he’s throwing his daughters under the bus, Cruz would like you to know that statement was his wife’s idea,” Jost said, a likely reference to the leaked group texts which showed Cruz’s wife planning the trip.

Jost was quick to point out the hypocrisy of Cruz arriving back from Cancún donning a Texas flag face mask. “It’s like if Jared and Ivanka walked down 5th Avenue wearing ‘I Love New York’ shirts.”

Cruz again was the punchline when Jost noted the Biden Administration’s announcement this week that it was opening an eight year path towards citizenship for asylum seekers. Jost warned it might not be a good idea given some of the people who come from Mexico while flashing Cruz’s photo returning from his vacation.

Embattled New York Governor Andrew Cuomo wasn’t spared either as Che quickly compared his countenance to “three Goodfellas at once.”

Che joked that Cuomo only wanted to legalize weed in New York in an effort to “forget about the nursing home stuff.” Cuomo recently was forced to admit that his administration had significantly undercounted deaths at New York nursing homes early in the pandemic.

Pete Davidson joined the Weekend Update desk to talk about his first Valentine’s Day without a high-profile celebrity and touched on how his erratic public life was even worse than that of Brittney Spears.

Watch below the opening segment of Weekend Update and Davidson’s bit.

The act of healing takes many forms. From the healing of a physical trauma, to the healing that takes place within our hearts...
Read more
Hollywood

Alejandro G. Iñárritu is underway on his first feature in the director’s chair since he won three Oscars for The Revenant. The Los Angeles...
Read more