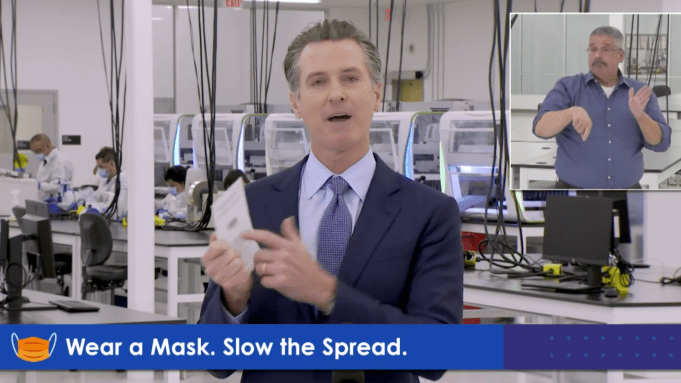 “This new laboratory will allow California to ensure its testing capacity is timely, equitable and cost-effective – just when Californians need it most,” Newsom said at the opening. At the time, Newsom boasted that the facility had been stood up quickly and $25 million under budget.

But on Monday, the California Department of Public Health announced that significant deficiencies in the Valencia Branch Laboratory during an initial routine inspection that occurred in early December. It is not the first time the facility has had issues.

“The deficiencies identified by Laboratory Field Services, although they are taken very seriously, do reflect that we established the laboratory on an accelerated timeframe, and we knew that there might be growing pains that would require work and process improvements,” said Health and Human Services Secretary Dr. Mark Ghaly.

Less than two weeks after California Governor Gavin Newsom announced the opening of the giant state COVID-19 testing lab in Valencia, the facility’s launch was marred by an unexpectedly high number of inconclusive test results. The state’s top health officer confirmed the news on November 10, but said problems that caused the issue have been identified and addressed.

Read the full press release from the California Department of Public Health below:

The Laboratory Field Services Division of the California Department of Public Health (CDPH), which regulates laboratories in the state, found significant deficiencies in the Valencia Branch Laboratory during an initial routine inspection that occurred in early December, when the laboratory first opened. PerkinElmer is confident these deficiencies will be quickly remedied to avoid any impact on the laboratory’s license.

PerkinElmer, the operator of the Valencia Branch Laboratory with CDPH, was provided the deficiencies on February 19, 2021, and has until March 1, 2021, to formally respond with how it has addressed or plans to address the laboratory’s initial challenges. In the interest of transparency, PerkinElmer and CDPH have agreed to make this public now instead of waiting until the full report on the Valencia Branch Laboratory is finalized mid-March.

The Valencia Branch Laboratory is seeking accelerated accreditation through the College of American Pathologists (CAP), a third-party independent entity, so that Californians have no doubt about the quality of the services at the laboratory. The CAP performed its initial inspection on Friday, February 19, 2021 and the laboratory fully expects a prompt and positive response.

California opened the Valencia Branch Laboratory in collaboration with PerkinElmer to expand laboratory testing capacity and ensure access to testing for neighborhoods that were disproportionately affected by the pandemic at a time when testing was relatively scarce and supply chains were strained.

The Valencia Branch Laboratory has successfully increased testing availability in communities at high risk for contracting COVID-19 such as essential workers, those in congregate care settings, and communities of color. The Valencia Branch Laboratory has performed more than 1.5 million tests on samples from a network of more than 1,500 specimen collection sites developed with churches, schools, clinics, essential workplaces, and community-based organizations.

Out of a total of more than 1.5 million tests performed, the Valencia Branch Laboratory has issued corrected reports for approximately 60 (.0039%) samples and been unable to test approximately 250 samples (.017%) due to lab errors.

“One incorrect test result is one too many. California takes these findings seriously and has been working hand in hand with PerkinElmer from the beginning to ensure Californians have the accurate, timely, high-quality test results,” said Health and Human Services Secretary Dr. Mark Ghaly. “When we opened the laboratory we committed to improving on our efforts to ensure we are delivering the best possible services. As a result, laboratory procedures and protocols are constantly evaluated and improved upon.”

“The Valencia Branch Laboratory was built and opened on an accelerated timeline to address a critical need for more COVID-19 testing capacity during this pandemic – and that capacity arrived just in time for our unprecedented winter surge,” Dr. Ghaly continued. “The deficiencies identified by Laboratory Field Services, although they are taken very seriously, do reflect that we established the laboratory on an accelerated timeframe, and we knew that there might be growing pains that would require work and process improvements.”

PerkinElmer, a global diagnostics company that runs the laboratory for the state, believes that the Valencia Branch Laboratory is not in danger of closure as nearly all of the deficiencies have been resolved for some time given the original inspection occurred over 10 weeks ago. The deficiencies that have not been fully resolved are in the process of being resolved and will be sufficiently resolved soon.

“PerkinElmer’s partnership with the State of California has enabled us to meaningfully help millions of residents in local communities as we have worked together to battle the pandemic,” said Prahlad Singh, PerkinElmer’s president and chief executive officer. “PerkinElmer remains confident in our continued positive impact, operating the highest quality laboratory to serve California residents.”

Throughout the pandemic, states have had to work independently to expand COVID-19 testing in order to mitigate the spread of the virus. As testing became more readily available, supply chains were stretched globally. This patchwork left many states ill prepared to address the rise in community transmission rates, and eventually hospitalizations. And the lack of access to testing exacerbated long-standing health inequities in low-income, minority, and rural communities.

Along with widespread vaccination, testing availability remains critical to California as the state looks to regain some sense of normal life again. Reliable, timely and cost-effective test results are critical to allowing schools and many businesses to re-open with confidence as the prevalence of COVID-19 continues to decline in California.

The full report on the Valencia Branch Laboratory, with responses from PerkinElmer, will be made available in mid-March.

EXCLUSIVE: The TV and film arm of Quality Control, the record label behind hip hop artists including Lil Yachty and Migos, has struck...
Read more
Hollywood