Home Shershaah praised for its 'realistic battle scenes' by Chief of Army Staff... 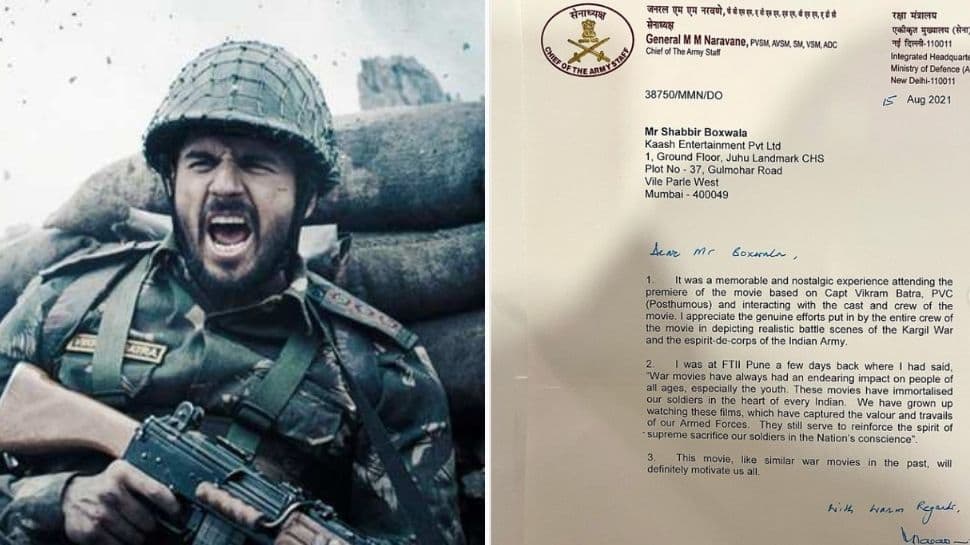 New Delhi: Co-producer of Shershaah Shabbir Boxwala, on Saturday, shared a letter of appreciation he received from India’s Chief of the Army Staff Gen. Naravane – a huge moment for the makers.

In the letter, the Chief of the Army Staff expressed that he appreciated the effort by the entire crew and said that the film accurately depicted battle scenes of the Kargil war.

He concluded the heartfelt latter by saying, “This movie like other war movies in the past will motivate us all.”

The senior producer was overjoyed by this compliment and took to Instagram to share the letter and expressed that he was deeply humbled.

He wrote in the caption of the post, “Humbled and beyond delighted to have received such high praise for #Shershaah from our Chief of the Army Staff, Gen. Naravane. Our years of hard work have paid off. Long live Vikram Batra. Long live the Indian Army!”

Check out a glimpse of the letter:

Shershaah, a war drama based on the true-life events of the Kargil War between India and Pakistan in 1999, tells the story of Captain Vikram Batra, a celebrated Indian army hero who selflessly lost his life whilst saving a fellow soldier during a war which would etch itself into Indian history.

Directed by Vishnu Varadhan, Shershaah is inspired by the life of Captain Vikram Batra (PVC) and stars Sidharth Malhotra and Kiara Advani in the lead roles.

It has been jointly produced by Dharma Productions and Kaash Entertainment.

<!-- -->Deripaska's representative said the raids were carried out on the basis of two court warrants.Washington: FBI agents on Tuesday raided Washington and...
Read more
Hollywood