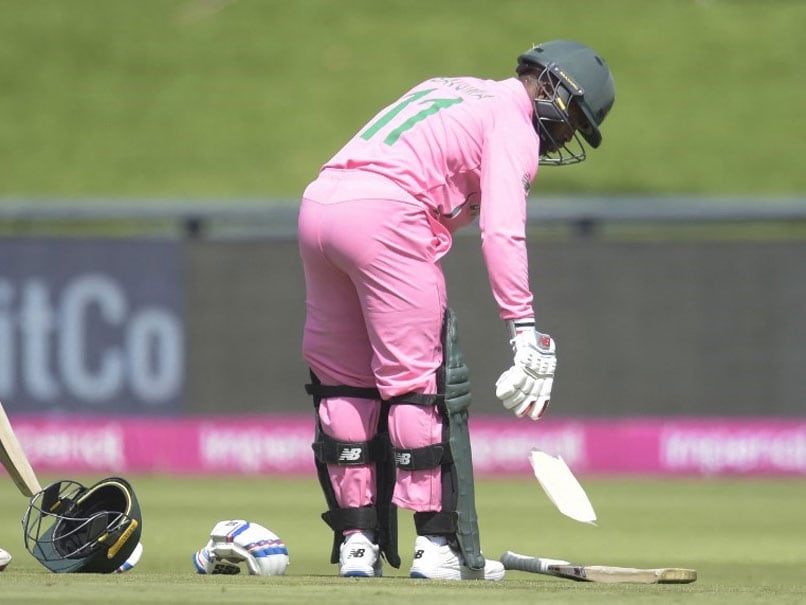 SA vs PAK: The back of Temba Bavuma’s bat just fell off as he made contact with the ball.© AFP


Bats these days, especially the ones carried around by international cricketers, use some of the best quality willows available in the world. They are bigger, badder and pack a massive punch as compared to the ones used by the greats of yore, making six-hitting a casual affair. But when it comes to longevity, they really don’t match up. Even so, when a bat splits into two when coming in contact with the ball, the effect is always dramatic. It’s still understandable that a bat breaks when an express pacer bowls a heavy ball and it hits somewhere near the bottom or the handle of a bat. But a massive piece falling off the bat when a batsman decides to just block the ball, a mere forward push that too to a delivery bowled at 130kph, is almost unheard of.

That’s exactly what took place during the second South Africa vs Pakistan ODI at the Wanderers in Johannesburg on Sunday.

South Africa captain Temba Bavuma pressed forward and defended a delivery from Pakistan pacer Faheem Ashraf and the back of the bat just came off as he made contact.

The ball was bowled at 130kph (81 mph). Goes without saying that Bavuma needed a replacement but he too looked a bit surprised when his bat broke.

Despite breaking his first-choice bat, Bavuma went on to score a fine 92 off 102 balls as South Africa amassed 341 for six in their 50 overs.

Pakistan opener Fakhar Zaman produced a stunning, record-breaking knock to give his team a chance to overhaul the target but he found little support from elsewhere.

He was finally dismissed for 193 off just 155 balls, seven short of what would have been the first double century while chasing in an ODI. His 193 still is the highest-ever individual score in ODIs while chasing but that will only be a consolation with Pakistan coming agonisingly close to the target, losing eventually by 17 runs.