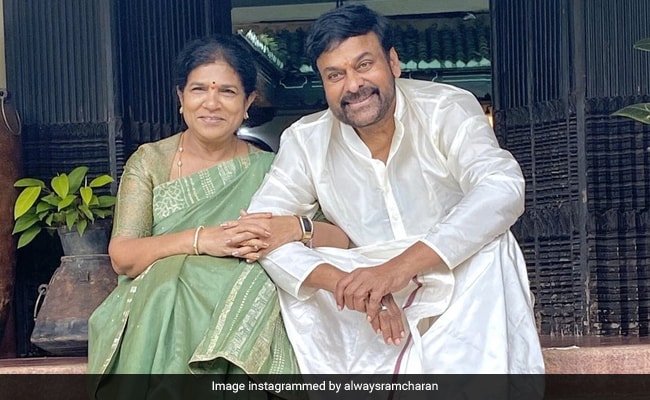 Ram Charan’s anniversary wish for his parents, actor Chiranjeevi and Surekha Konidela, is all things nice. The actor, on Saturday, posted a happy picture of his parents on social media with a touching caption that will melt your heart. In the photo, Chiranjeevi and Surekha can be seen dressed in traditional outfits and posing on stairs of a house. Their smiles speak a thousand words. Sharing their photo, Ram Charan called them his “biggest strength.” He wrote: “My biggest strength!! Wishing you both a very Happy 42nd wedding anniversary!” Chiranjeevi married Surekha, daughter of late actor Allu Ramalingaiah, in 1980. The couple are parents to Ram Charan and two daughters – Sushmita and Sreeja. Chiranjeevi is also the uncle of actors Allu Arjun, Allu Sirish, Varun Tej, Niharika and Sai Dharam Tej.

Check out Ram Charan’s post for his parents here:

Just a day ago, Chiranjeevi, Ram Charan and their whole family celebrated the birthday of Surekha Konidela. The Magadheera actor even shared a post for his mother. Take a look:

In terms of work, Chiranjeevi has worked in several Telugu, Tamil and Kannada films. He was last seen in the 2019 film Raa Narasimha Reddy, which also starred Amitabh Bachchan in a significant role. He will next be seen in Telugu film Acharya, directed by Koratala Siva.

Ram Charan, who is also a producer, has worked in several hits like Magadheera, Racha, Naayak, Yevadu, Dhruva, Rangasthalam and Zanjeer. Ram Charan’s next project as an actor is RRR, directed by SS Rajamouli. The film is set in the 1920s and it is a fictitious story based on two legendary freedom fighters – Alluri Seetharamaraju and Komaram Bheem, who fought against the British Raj and the Nizam of Hyderabad, respectively.