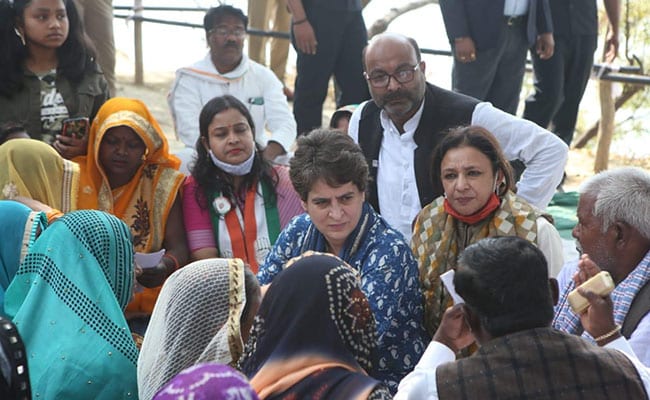 Priyanka Gandhi Vadra, tasked with reviving the Congress in Uttar Pradesh for the 2022 assembly election, was today on her second visit to Prayagraj within a fortnight. The Congress general secretary, who had taken a holy dip at Sangam and a boat ride during her February 11 trip, was today in the city to support the sizeable Nishad community that has alleged harassment by the UP Police. “Yogi Adityanath’s government is with the mining mafia, not with the Nishad community,” she told reporters after spending nearly one-and-a-half hour with members of the other backward class (OBC) group.

Earlier this month, the police had lathi-charged people from the community at the Banswar village – where Ms Vadra met with the community today – while running a campaign against illegal mining and had allegedly damaged several boats. “These people should get compensation (for the damaged boats),” she said today.

The community has been demanding that its members should be given mining contracts. “If the mining mafia is allowed to mine here, why can’t those – who live here, who have a right on contracts, on this land, on this river – work here,” she said.

There is a large number of Nishad votes spread across 152 assembly and 19 Lok Sabha seats in Uttar Pradesh. In the 2014 and 2019 general elections, the community had supported the BJP.

“The Nishad community’s life is linked to rivers, they understand the pain of rivers…Like the agriculture laws are for some billionaires, the UP government is for the sand mafia,” the Congress leader said.

She said that the BJP government in Uttar Pradesh had been formed with help from the community’s votes. “…but now the community is being harassed in their rule”.

Terming the alleged police action as wrong, she said, “The government has been trying to dismiss boatmen from what is rightfully theirs”.

She assured that her party will take the fight of the community to parliament.

Before departing from the village, the Congress leader briefly interacted with a group of girls in the area.

Priyanka Gandhi has lately been visiting the state frequently to drum up support for the party.

Earlier this month, she attended a farmers’ mahapanchayat or gathering in Saharanpur to protest against three new agricultural laws. “The three laws are demonic. If voted to power, the Congress will scrap these laws,” she had said.