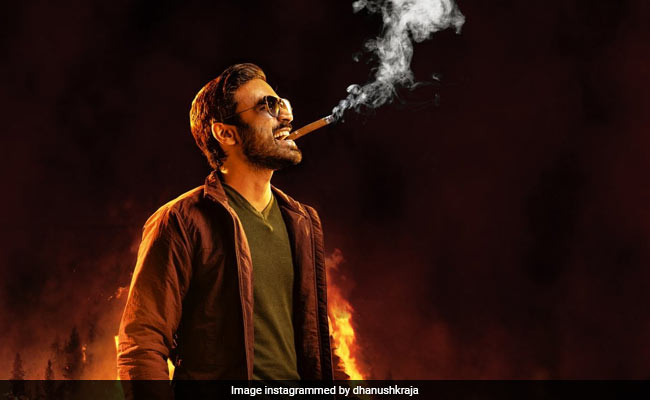 South star Dhanush occupied the top spot on the list of trends on Wednesday, courtesy his new film announcement. The actor, who recently joined the cast of director duo Anthony and Joe Russo’s new film The Gray Man (more on that later), unveiled the title and first look poster of his new film Naane Varuven. The film will be helmed by none other than Dhanush’s brother, director Selvaraghavan. The collaboration between Dhanush and his brother was announced earlier, when the film was tentatively titled S12. Naane Varuven will be produced by Kalaipuli Thanu. In the first look poster, Dhanush looks fierce with a burning house in the background. The actor also shared the title look on Wednesday.

Dhanush and his brother Selvaraghavan have worked together on a couple of films in the past, including Thulluvadho Ilamai, Kaadhal Kondein, Pudhupettai and Yaaradi Nee Mohini. The duo will also collaborate for the second instalment of Aayirathil Oruvan. Announcing Aayirathil Oruvan 2 on social media, Dhanush wrote this on January 1: “A magnum opus! The pre-production alone will take us a year. But a dream film from the master Selvaraghavan. The wait will be long. But we will give our best to make it all worth it. AO2…The Prince returns in 2024.”

A magnum opus !! The pre production alone will take us a year. But a dream film from the master @selvaraghavan ! The wait will be long. But we will give our best to make it all worth it. AO2 ..The Prince returns in 2024 https://t.co/HBTXeN66iA

Dhanush joined the star cast of The Gray Man in December. “Elated to announce that I will be joining the team of Netflix’s The Gray Man, starring Ryan Gosling and Chris Evans, directed by the Russo Brothers. Looking forward to being a part of this wonderful action-packed experience,” read his statement on his official Twitter handle.

Dhanush, a renowned star in the southern film industry, is best known for his performances in films such as Maari 2, The Extraordinary Journey Of The Fakir, Velaiilla Pattadhari 2, Shamitabh and Asuran.

<!-- -->The makers of RRR shared a new poster. (courtesy aliaa08)HighlightsThe film will release on October 13 in cinemas The film also...
Read more