On Camera, Students Throw Bricks At Officials Amid Anti-Covid Drive In Sasaram 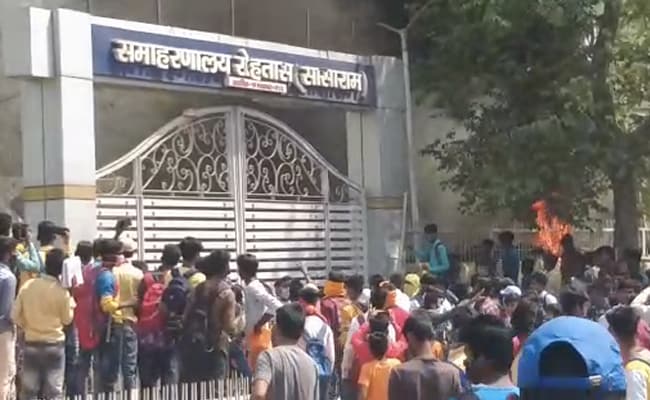 Nine students have been taken into custody following the violence in Sasaram.

Outraged students also set fire to the collectorate gate during the protests at the post office square of Sasaram. The police had to charge at the crowds with batons to restore order.

Students allege that the government enforces coronavirus guidelines on educational institutions but does not take actions against public meetings or violaters at crowded markets, where they say Covid protocols are mostly violated.

The police, however, claimed that anti-social elements were involved in the violence. “It seems some anti-social people instigated these students leading to ransacking of government properties and torching of vehicles,” Ashish Bharti, a senior police officer in Sasaram, told NDTV.

Amid a worrying surge in cases, the Bihar government has deferred the reopening of schools and colleges in the state till April 12. All institutions have been directed to reschedule tests and examinations accordingly, the department said in a release.

Bihar has been witnessing a spike in instances of fresh cases. The state now has 2,942 active cases, a more than two-fold rise since a week ago.

The spurt has caused the recovery rate in Bihar, which was more than 99 per cent till recently, to drop to 98.31 per cent.

<!-- -->43 assembly seats across four districts are up for polls in this phase. (Representational)Kolkata: The sixth phase of assembly elections in Bengal...
Read more