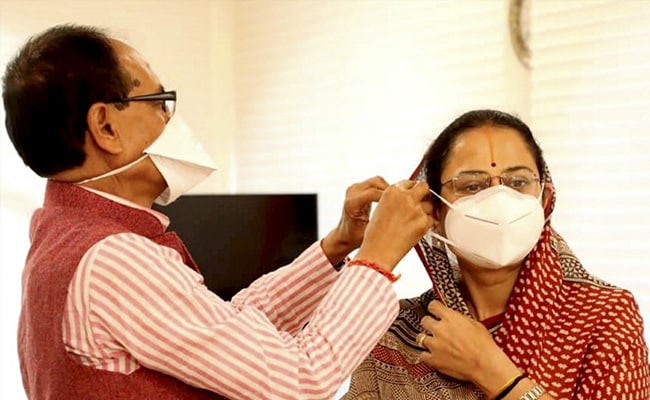 The surge in cases now is due to people lowering their guard, Mr Chouhan said after starting a 24-hour ‘sit-in’ here to spread the awareness among people about following the COVID-19 prevention guidelines.

The Chief Minister launched the “Swasthya Agrah” (health request) at the Minto Hall in Bhopal at 12:30 pm today and during his 24-hour ‘sit-in’, he will interact with people online and conduct his official work from the venue.

“Wearing masks and maintaining social distance are not in our habit. Besides these, we have to take other measures also to control the pandemic. So, I am sitting here for a moral request to make these things a part of people’s habit,” Mr Chouhan said.

He said it is a “crime” if someone is not wearing a mask, because this also affects the health of others around that person reported news agency Press Trust of India.

Mr Chouhan said he launched an awareness campaign for wearing masks on Monday.

“I ensured that me and my family wear masks…the word ‘mask’ means ‘mera aapka suraksha kavach’ (my and your safety shield),” he said.

The coronavirus cannot be controlled only by government’s efforts, because the infection is being spread by (inappropriate) social behaviour, he said.

“We are making efforts to arrange facilities to fight the pandemic at the government level, but the infection spread has to be stopped by (appropriate) social behaviour,” he said.

Mr Chouhan said people became complacent when the viral infection was brought under control in the country a few months back due to efforts of Prime Minister Narendra Modi and launch of the vaccination drive.

“This has again caused the spread. Lockdown is an easy solution, but I don’t consider it right. A limited lockdown is ok, but a permanent one is not a solution,” he said.

The Chief Minister said self-discipline is necessary to prevent the spread of the infection, and urged people to wear masks, maintain social distance, wash hands and adopt other precautionary measures.

Mr Chouhan said his office will function during his 24- hour sit-in campaign.

“I will review the COVID-19 situation in the state, talk to leaders of various sections of society and religious leaders on awareness about the disease and also hold a cabinet meeting, besides other works, during this Swasthya Agrah,” the Chief Minister said.

Mr Chouhan also said he has urged his party (BJP) workers not to come to the venue of his campaign so as to maintain social distance.

The state government is also making efforts to take the help of volunteers, who can register themselves for assistance in the vaccination process, spread awareness about the prevention norms, and help patients in home and institutional quarantine, he said.