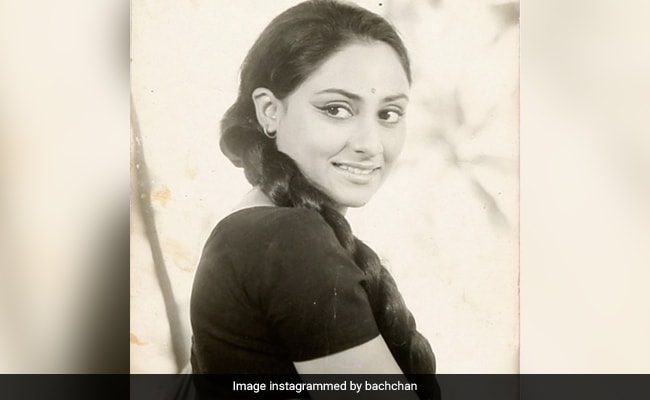 On mom Jaya Bachchan’s 73rd birthday, Abhishek Bachchan handpicked a stunning throwback photograph of the actress. He shared the autographed picture on his Instagram profile on Friday and he wrote: “Happy Birthday ma.” In the picture, a young Jaya Bachchan can be seen smiling with all her heart. In the comments section, Abhishek’s friends and fans wished the actress a very happy birthday. Hrithik Roshan, a friend of Abhishek and his Dhoom 2 co-star wrote: “Happy birthday Jaya aunty.” Esha Deol, who worked with Abhishek in Dhoom also sent a birthday greeting. Abhishek’s niece Navya Naveli Nanda loved her grandmother’s picture so much that she dropped hearts in the comments and wrote: “Stealing this.”

Abhishek’s parents and Bollywood veterans Amitabh Bachchan and Jaya Bachchan  got married in June 1973 and they have featured together in films such as Zanjeer, Sholay, Abhimaan, Mili, Chupke Chukpe and Silsila, among many others. Jaya Bachchan appeared only in a handful of films after the birth of Shweta Bachchan Nanda and Abhishek Bachchan. In more recent years, Big B and Jaya appeared together in movies like Kabhi Khushi Kabhie Gham and the 2016 film Ki And Ka.

Abhishek co-starred with his mother in the 2002 Bengali film Desh. In one of his posts last year, the actor revealed that when he visited Jaya Bachchan on the sets of the film, he ended up doing a cameo appearance in it.

Abhishek Bachchan will next be seen in a film based on Bob Biswas, which is being produced by Shah Rukh Khan’s Red Chillies Entertainment. The actor recently starred in The Big Bull, which opened to mixed reviews on Friday. In 2020, the actor had two releases – Anurag Basu’s Ludo and Amazon Prime’s web-series Breathe: Into The Shadows, which marked his digital debut. He will reportedly star in Gulab Jamun, co-starring his wife Aishwarya Rai Bachchan.

<!-- -->If Delhi fails to clean its toxic air, the IT sector could lose more than $2.5 every year, study warnedNew Delhi: Air...
Read more