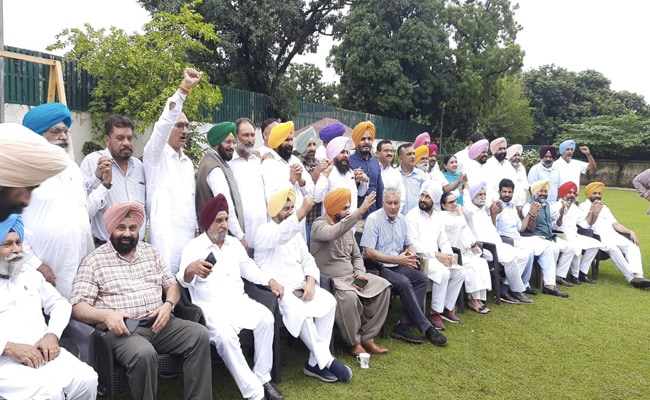 Navjot Sidhu had started the day by thanking the Gandhis and taking a dig at Amarinder Singh.

Cricketer-turned-politician Navjot Singh Sidhu celebrated his first day as Punjab Congress chief with a road trip, hugging party leaders met on the way and picking them up in his car. Though his final destination remains unknown, his first stop was the home of cabinet minister Tript Rajinder Singh Bajwa.

Asked about the events of yesterday, and his elevation despite the Chief Minister’s disapproval, Mr Sidhu told NDTV, “I will speak when I have to”.

Mr Sidhu –who was named the state Congress chief last evening despite the opposition of Chief Minister Amarinder Singh — had started the day thanking the Gandhis and taking a dig at Mr Singh, his political rival since the 2017 elections.

To share prosperity, privilege & freedom not just among a few but among all, My father a Congress worker left a royal household & joined freedom struggle, was sentenced to death for his patriotic work reprieved by King’s Amnesty became DCC President, MLA, MLC & Advocate General. pic.twitter.com/fTv0eNlNyt

Mr Singh’s father was ruler of the erstwhile princely state of Patiala.

The elevation of Mr Sidhu last night after weeks of infighting was seen as a snub to the Chief Minister and party veterans, who were against what they dubbed a “BJP reject” calling the shots.

After a meeting with party chief Sonia Gandhi and senior leader Harish Rawat, Mr Singh had agreed to the elevation conditionally.

But all three of his riders — being consulted before key changes in party, a free hand in picking the Working Presidents, and a public apology from Mr Sidhu for his disparaging tweets — were all ignored.

Yesterday’s order from party General Secretary KC Venugopal also named four Working Presidents, but none of them were vetted by Mr Singh.

Mr Sidhu is also to extend an apology or retract his disparaging tweets about the Chief Minister.

Asked about the Central leadership’s decision to elevate Mr Sidhu amid the factionalism, Punjab cabinet minister Charanjit Singh Channi told  NDTV that the “high command takes decision based on the pulse of public”.

“In 2017, the decision to elevate Captain Amarinder Singh as the Congress chief was taken based on the needs and demands of the public. The same has been done now… The party doesn’t take a decision on the wishes or demands of one person. If one person’s choice was being followed, then Amarinder Singh wouldn’t have been made the party chief in 2017,” he added.

Asked about the infighting in the party, he said, “Everyone wanted their opinion to be accepted by the high command… but since a decision has been made, now there should be no dispute”.

“There is no rift in the Congress. It’s all only being shown by the media. This is a family and there can be disagreements among family members but there is no rift no disputes,” added Kuljeet Singh Nagar, who has been named a Working President.

<!-- -->The judge ordered the Gateses to divide their property according to the terms of a separation contract.Three months after they first announced...
Read more