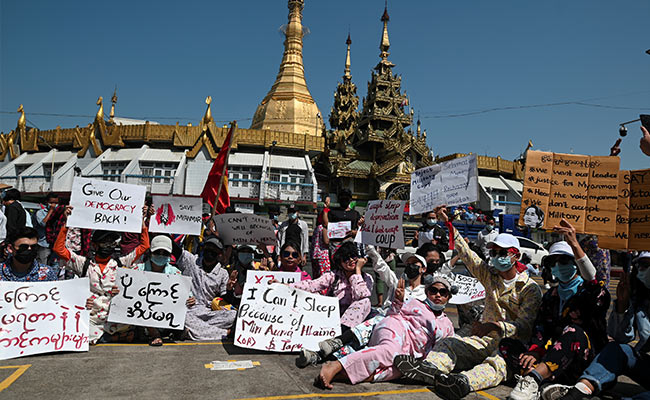 People display placards as they rally against military coup and to demand release of Aung San Suu Kyi.

Protesters returned to the streets of Myanmar on Wednesday despite the shooting of a young woman the previous day, with some deploying humour to emphasise their peaceful opposition to this month’s military takeover.

The coup has drawn Western condemnation. U.S. President Joe Biden will deliver remarks on the U.S. response at 1 p.m. (1800 GMT) on Wednesday, the White House said. He is expected to announce sanctions on those responsible for the takeover, according to a person familiar with the matter.

Mya Thwate Thwate Khaing, 19, was the first known serious casualty of the protests and her wounding rallied support for the movement seeking to reverse the Feb. 1 coup and free elected leader Aung San Suu Kyi and her allies from detention.

“We cannot stay quiet,” youth leader Esther Ze Naw told Reuters. “If there is blood shed during our peaceful protests, then there will be more if we let them take over the country.”

There were no reports of violence on Wednesday and in many places protests took on a festive air, with bare-chested body builders, women in ball gowns and wedding dresses, farmers on tractors and people with their pets.

Thousands joined demonstrations in the main city of Yangon, while in the capital, Naypyitaw, hundreds of government workers marched in support of a growing civil disobedience campaign.

A group of police in Kayah state in the east marched in uniform with a sign that said “We don’t want dictatorship”, according to pictures published in the media.

Earlier, soldiers took over a clinic that had been treating wounded protesters in Naypyitaw on Tuesday, a doctor there said.

The teenager was shot when police fired, mostly into the air, to clear the protesters. Her brother, Ye Htut Aung, told Reuters the family — though supportive of the protests — had urged her not to go but she insisted.

The army’s True News Information Unit said in a statement the security forces only used non-lethal weapons. It later said that because of aggression from protesters police “inevitably” had to shoot, adding that 28 police were injured.

Protesters draped a big portrait of Mya Thwate Thwate Khaing from a bridge in Yangon. A doctor at the hospital where she was being treated told Reuters she was not likely to survive.

Human Rights Watch said a 20-year-old man also wounded by a bullet was in a stable condition, while doctors said three other people were being treated for wounds from suspected rubber bullets. Protesters were also hurt in Mandalay and other cities.

The protests are the largest in Myanmar in more than a decade, reviving memories of almost half a century of direct army rule and spasms of bloody uprisings until the military began relinquishing some power in 2011.

The military, which has imposed restrictions on gatherings and a night curfew in the biggest cities, justified its takeover on the grounds of fraud in a Nov. 8 election that Suu Kyi’s NLD party won by a landslide. The electoral commission dismissed the army’s complaints.

He said that “hundreds of arbitrary detentions” had been recorded since the coup. Four regional chief ministers who had served with the previous government were arrested late on Wednesday, local media said.

Avinash Paliwal, a senior lecturer at London University’s School of Oriental and African Studies, said Myanmar would not be as isolated now as it was in the past, with China, India, Southeast Asian neighbours and Japan unlikely to cut ties.

“The country is too important geo-strategically for that to happen. The U.S. and other Western countries will put sanctions – but this coup and its ramifications will be an Asian story, not a Western one,” Paliwal said.

Underscoring that Asian stance, the prime minister of neighbouring Thailand, Prayuth Chan-ocha, himself a former army chief who seized power in a 2014 coup, said he had received a letter from Myanmar’s new junta leader, army chief Min Aung Hlaing, asking for help to support democracy.

“Thailand supports the democratic process. The rest is up to him to see how to proceed,” Prayuth said.

Suu Kyi, 75, won the Nobel Peace Prize in 1991 for campaigning for democracy and remains hugely popular at home despite damage to her international reputation over the plight of the Muslim Rohingya minority.

She has spent nearly 15 years under house arrest and now faces charges of illegally importing six walkie-talkies and her lawyer said he has not been allowed to see her.