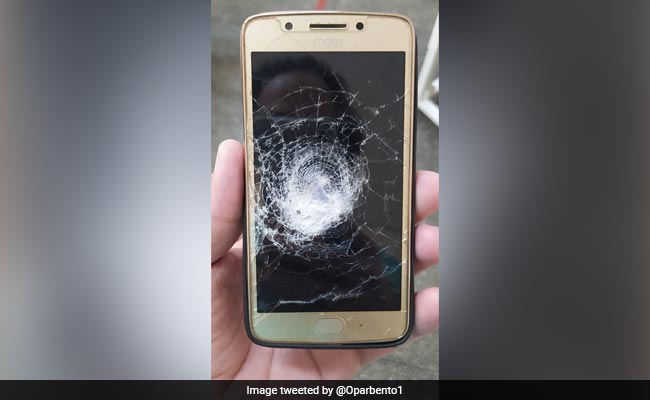 Most of us have our mobile phones attached to our bodies like an extra limb. While we have all been told to get off the phone and reduce screen time at least once in our lives, it is holding onto the phone that saved a citizen’s life in Brazil. And, might we add, this man was having no ordinary brush with death. The man in question was a victim of an armed robbery in Brazil recently. He was shot at during the incident, but the bullet only grazed past his hip. This happened because much of the impact was borne by a five-year-old Motorola smartphone that stopped the bullet.

The coolest part of this story is that the G5 phone which turned saviour for the day also had an Incredible Hulk phone case on it.

As per the Daily Mail, the attempted robbery occurred in a rural area of the municipality of Petrolina, in the northeast of the country on October 7. The victim was admitted to the University Hospital in the city of Petrolina.

The images of the phone were posted on social media by Pedro Carvalho, one of the doctors who was attending to the victim. While shootouts at armed robberies often lead to tragic deaths and irreversible damage, doctors saw that in this case, it was the phone that absorbed most of the bullet’s impact.

In the pictures shared by Pedro Carvalho, the phone can be seen with a badly shattered screen. The Hulk phone cover, however, looked as good as new. Sharing the pictures, the doctor wrote a note that translates to, “Patient was admitted to the ER after being shot in a robbery,  and the bullet ended up in his cell phone…” The tweet went viral on social media with 6,355 likes and hundreds of retweets.

This is not the first time a phone has saved a person from a bullet. A few years ago, a man in Taiwan survived a gunshot thanks to a Samsung Galaxy Mega 6.3 smartphone that took a bullet for him.

The man was shot in the arm but the bullet was blocked by the phone in his shirt pocket, preventing it from reaching his chest. While the person was reported to be out of danger, the phone was beyond help.