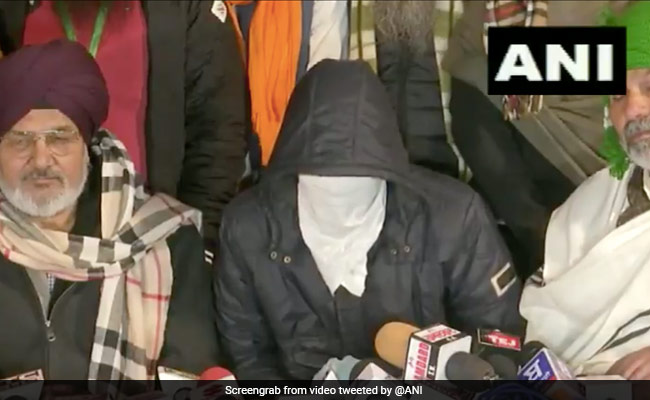 The man had arguments with farmer volunteers over allegations of sexual advances, police said.

A day after a masked man at Singhu border of the national capital alleged a plot to shoot four farmer leaders and cause disruption during a tractors march by protesting farmers on January 26, Haryana police on Saturday refuted the accusations saying that that the man has made statements under fear.

While addressing a press conference, Sonipat Superintendent of Police (SP) Jashandeep Singh Randhawa said that the masked man is a resident of Haryana’s Sonipat and is currently unemployed.

“Yesterday, he (the masked man presented by farmer leaders at Singhu border) alleged that he was tasked by one inspector Pradeep, SHO of Rai Police Station. Our preliminary investigation shows that there is no inspector named Pradeep in the district or at Rai Police Station,” Mr Randhawa said.

“He had alleged that he used to get calls from a landline number. Details gathered by us don’t show any such thing. He was also not present at CM’s rally in Karnal on January 10 as alleged,” Mr Randhawa added.

The police officer also gave details about the masked man against whom no criminal record was found.

“He is a resident of Sonipat. His father is a cook and his mother washes dishes. This masked person used to work in a factory. After the COVID-19 lockdown, he was expelled and is currently unemployed. On questioning, it came to the fore that he had arguments with farmer volunteers over allegations of eve-teasing. He was taken to a camp where he was beaten up. He has said he made statements under fear. No criminal record was found against the person,” Mr Randhawa said.

“We made a DSP level committee to probe the matter for a fair probe. He is neither under detention nor has been arrested. We are just questioning him,” the official added.

The official further said that for the tractor yatra, “Police has taken adequate measures”.

“We have deployed sufficient manpower in sub-division levels, especially from Kundli-Manesar-Palwal (KMP) to Singhu border,” he added.

Addressing the media persons a day earlier, farmer leader Kulwant Singh Sandhu claimed, “Attempts are being made by agencies to disrupt the farmers’ agitation.”

He further said that the masked man, along with his other teammates, have been threatened that their family members will be killed if they leak any information.

Speaking to the media, the masked man said, “We had planned to stop farmers from moving ahead during the January 26 rally and if they did not stop, we had planned to first fire in the air and then our other teammates were to fire from behind so that the police officials present at the spot think that the farmers are firing at them.”

The masked man was later handed over to the police.