Making of the Constitution E-Photo Exhibition Launched In Delhi 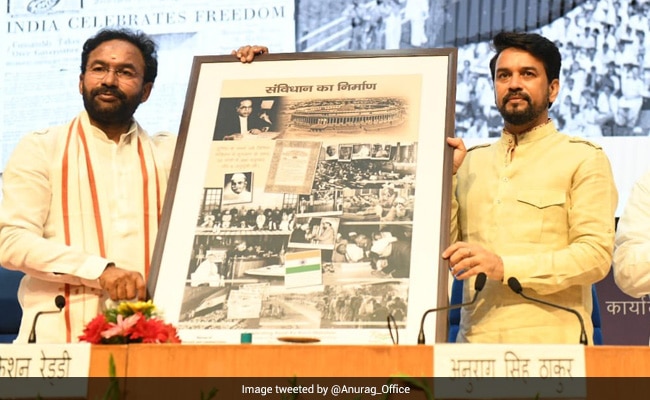 An e-photo exhibition – “Making of the Constitution” – and a virtual film poster exhibition “Chitranjali@75 was launched in Delhi by Union Minister Anurag Thakur on Friday to showcase the journey of new India and celebrate the contribution of freedom fighters.

The event was organized as part of ‘Iconic Week’ being celebrated by the Ministry of Information and Broadcasting to celebrate the government initiative ‘Azadi Ka Amrit Mahotsav’.

Mr Thakur, the Union Minister for Information and Broadcasting, said that the purpose of the e-photo exhibition is to inform people on the making of the Constitution. On the virtual poster exhibition, he said “Chitranjali@75 represents 75 years of Indian cinema and I am sure it’s going to evoke sacred memories of our freedom fighters, our social reformers and the valour of our soldiers. We have tried to include 75 such iconic films in our poster exhibition”.

The virtual poster exhibition traces the nation’s journey by showcasing the Indian cinema glorifying the bravery and sacrifice of the freedom fighters and soldiers, films that reflected the undercurrents of the society and led to various reforms, and films which immortalised the heroes in uniforms – the armed forces.

Mr Thakur also announced at the event that very soon the government will run a ‘Know Your Constitution’ programme to encourage the youth to partner in the efforts to propagate the founding principles of the constitution.