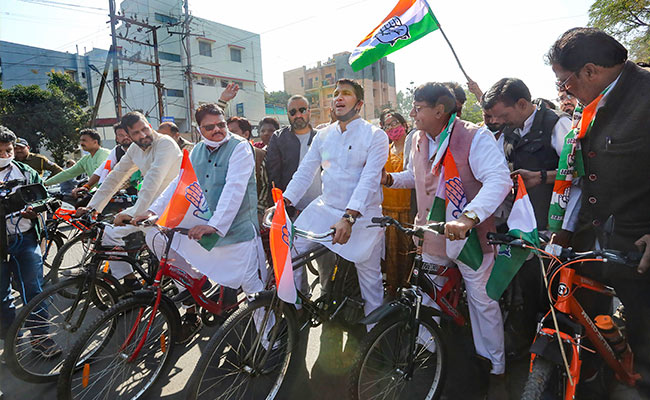 The Congress MLAs rode bicycles to the Assembly complex from Vyapam Square in the city.

Legislators of the opposition Congress on Monday reached the Madhya Pradesh Assembly complex in Bhopal on bicycles as a mark of protest against the rise in fuel prices.

The budget session of the state Assembly began on Monday.

Mr Sharma said crude oil prices in the international market almost doubled during the previous UPA regime at the Centre, but the rates of petrol, diesel and LPG in the country were lower at that time.

“Now, when the prices of crude oil are lower in the international market, the fuel is being sold at much higher rate,” the MLA from Bhopal South-West said.

Notably, during the previous UPA regime at the Centre, Mr Chouhan had registered his protest against fuel price hike at that time by riding a bicycle.

“A new jet was purchased and a huge amount of money was spent on bungalows during the Congress regime,” the BJP leader alleged.

Mr Sarang said the Congress legislators did “this drama” on Monday only to grab media’s attention.

They should use bicycle every day if their protest is real, he added.

The budget session of the state Assembly will continue till March 26.