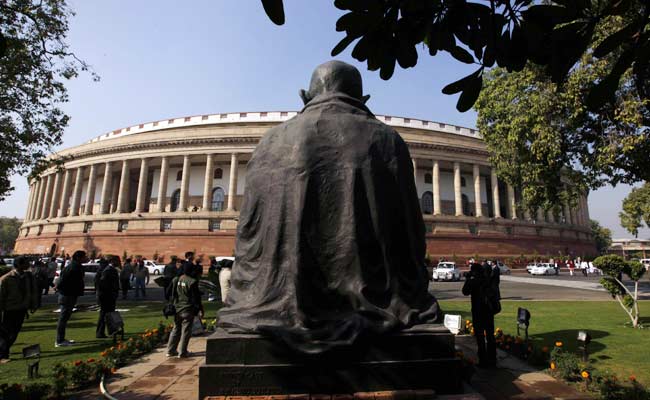 Ram Sharan was assigned the Parliament beat in 2000. (File photo)

Prime ministers changed as did ministers and there were new MP faces every five years but Ram Sharan “Postman”, assigned the Parliament beat, remained a constant – walking up and down the corridors of power for the last 21 years. Right till he delivered his last “daak“.

The common man who found himself among India’s most powerful, Ram Sharan retires on Tuesday, content, he says, to have served “all with equal importance and without a single complaint”.

“You don’t get to deliver mail inside the House for 21 years if you make mistakes and bring back complaints,” Ram Sharan told PTI, a day ahead of his final adieu from the postal service on Tuesday and three days after he dropped his last “daak” in Parliament on Friday.

Had Monday not been Janmashtami, today would have been his last working day “in Parliament”. After long hours of walking from one office to another to deliver mail inside the sprawling Parllament House complex, Ram Sharan said he would take a few moments to quietly sip tea outside the Red Cross building on Sansad Marg and reflect on the day that had been.

“I never let anyone be disappointed. If anyone asked me about their mail not getting delivered, I’d make sure it reached them or at least knew where it was stuck. Be it a senior minister or an ordinary person like you or I, my job was to deliver their post which I did as best as I could,” Ram Sharan said.

When he was posted at Parliament House in 2000, nobody wanted to take the “beat” because of its labyrinthian corridors and seemingly similar rooms and doors that appeared confusing to most.

“People were afraid to be posted there. They would request to be shifted within two days. In the initial few days, I, too, was confused as the doors were the same, the rooms looked the same and some paths would end abruptly and you ended up at places you weren’t going to,” he recalled in a phone interview.

The map was soon etched on his mind though, and he continued delivering mail to their recipients without error with the help of the House staff.

Walking through the maze that is Parliament House, the postman said it was not unusual for him to come across ministers or their staff, who became familiar with the man with mail and helped him in small matters.

“Prime ministers and ministers, all these people kept changing, but my focus was always on my duty. The post office gave me a duty and it was my responsibility to perform it with perfection,” said the 60-year-old.

Much has changed since 2000 when he was given the beat. Back then, Mondays were the busiest as well as heaviest days. Every Monday, he would put three bags of mail, each weighing 50 kg, in the postal van, which then dropped the bags at the Parliament library.

With the decreasing popularity of postal services — as communications entered the e-age, and the definition of mail changed to emails — the load has now reduced to one, maybe two bags on Mondays. The rest of the week, it’s barely 17 kg on average.

There is a method in how every postman functions and Ram Sharan takes pride in the regimen he developed for himself.

Talking about his day, Ram Sharan said he would reach Gol Dak Khana at 10 am from his home in Faridabad. For the next hour and a half, he would sort mail, make entries in the computer, load the mail and wheel out his cycle to make the one-kilometre journey to Parliament House.

“It’s a rule in every postman’s life to arrange your mail in a way that you don’t have to visit a place again. If you do that half your work is done. And the second is to be patient and courteous… because you spend about an hour in the office and the rest with the public,” he said.

The soft-spoken postman travelled his route on cycle every day, till one evening in 2011 when he met with an accident while returning to office.

“I injured my foot and was told to do office duty for two months. Even though my foot healed I still cannot carry heavy weight, so I had to let go of my cycle,” he remembered.

In the last 10 years, he would hire an autorickshaw from Gol Dak Khana to Parliament Library (paying from his own pocket) and walk back to office in the evening.

He worked with the Railway Mail Service from 1981 till 1989, also a department of India Post. In 1989, India Post put out a notice for postman vacancies, for which he applied and got through after writing an exam.

Since 1989, after his stint with the Railway Mail Service, he has been covering areas around Mandi House, including Rabindra Bhawan, Sangeet Natak Akademi, Bharatiya Vidya Bhawan and the Indian Council of Historical Research before it was shifted to Connaught Place.

“ICHR used to receive so much mail that it was heavier than me and the front wheel of my cycle would go up,” he laughed.

As he hangs up his boots and readies for his farewell tomorrow, Ram Sharan said there are no regrets. It has been a lifetime of work well done.

The father of seven, all married and settled in their respective lives, now plans to become a member of the union of retired postmen. He believes it is important to keep meeting people and know new things “else your mind stops working”.

“I was Ram Sharan Verma till school then I insisted on going without Verma. Now everyone knows me as Ram Sharan Postman. That is my identity.