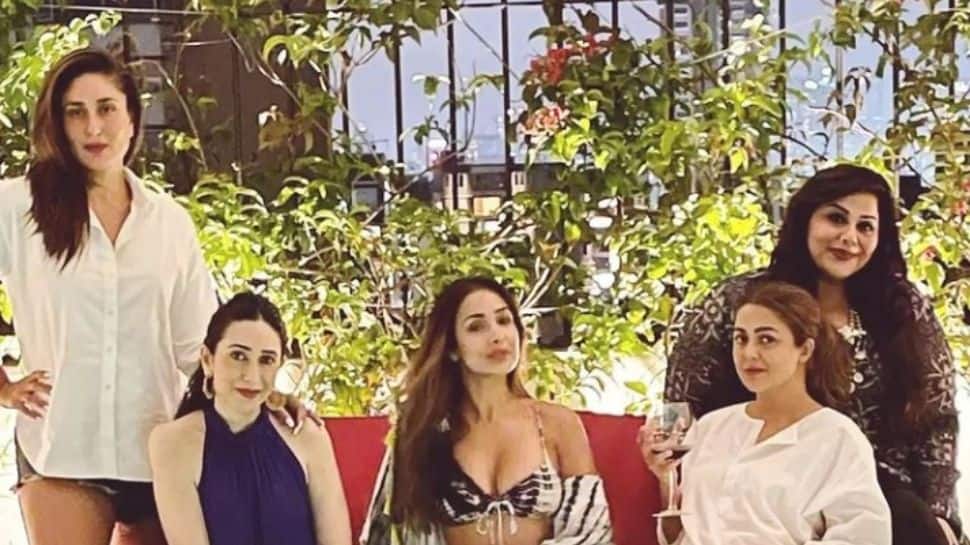 New Delhi: Bollywood besties Kareena Kapoor, Amrita Arora, Malaika Arora and Karisma Kapoor had a smashing Saturday night (August 28) and it’s all over social media. On Saturday night, the ‘Jab We Met’ actress took to Instagram to share a glimpse of her weekend with her ‘forever girls’ as she affectionately calls them.

In the picture, we see Bebo in a white top and shorts, looking glamorous as ever, Karisma Kapoor in a chic navy blue top, Malaika in a tie-dye bralette and Amrita Arora in a white kurta, enjoying a glass of red wine. The gang posed on a modern red sofa with indoor plants in the background.

The girl gang look picture perfect together and will make you wish you were part of their group!

Here’s a picture from their Saturday night:

Karisma Kapoor and Kareena are often seen spending time on the weekends with Karan Johar, Malaika Arora and Amrita Arora.

A few weeks ago, B-Town celebs had gathered for an intimate house party and the pictures from the event were as glamorous as ever.

The star-studded event had also included Shah Rukh Khan and his wife Gauri Khan which is a rare occurrence.

On the work front, Kareena will next be seen in Aamir Khan’s ‘Laal Singh Chaddha’. The duo will reunite after their last film together ‘3 Idiots’ and Saif Ali Khan has Bhoot Police with Arjun Kapoor up for release.

MUMBAI: Actor Aparshakti Khurana is filled with gratitude for all the love and appreciation for his recently released film 'Helmet'. The film is Aparshakti's...
Read more
World

EXCLUSIVE: Paulo has been named President of 42West’s West Coast Entertainment Marketing Division. The appointment was made by CEO Amanda Lundberg. Paulo will...
Read more