Kalka Mail Renamed To Netaji Express Ahead Of His Birth Anniversary 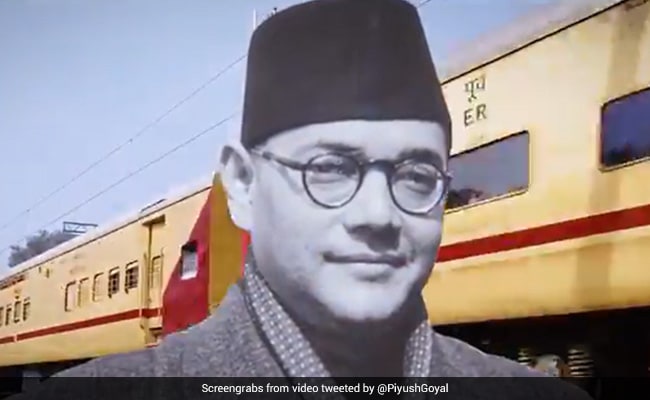 Kalka Mail will be renamed to Netaji Express, Piyush Goyal announced on Friday.

Railways Minister Piyush Goyal announced the decision to rename the 130-year-old train to honour Netaji who used it to escape British captivity in 1941. Saturday will mark the 125th birth anniversary of Netaji.

“Saluting Subhash Chandra Bose ji’s unforgettable contribution in the freedom struggle, his birth anniversary will now be celebrated as Parakram Diwas. The Indian Railways has decided to run Howrah-Kalka Mail under the name of Netaji Express in his memory,” the minister wrote on Twitter.

Originally numbered “1 Up / 2 Dn” denoting its significance in pre-Independence rail connectivity, Kalka Mail began its journey as the ‘East Indian Railway Mail’ in 1966 between Kolkata (then Calcutta) and New Delhi. Its route was extended from Delhi to Kalka in 1891.

The train was crucial for the British to move their people and government machinery to summer capital Shimla (then Simla) and back. When train numbers were revised in the ’90s, the train lost its preeminent ranking and became 12311 and 12312.

The train, which has found significant airtime in popular culture including works of director Satyajit Ray, also played a pivotal role in the heroics of Netaji.

Jailed following the outbreak of World War II in 1939 and later put under house arrest in 1941, Netaji escaped from his home on January 17 using a car to get to Jharkhand and boarded the Kalka Mail on his journey towards Peshawar.

From Peshawar, he went to Afghanistan, the Soviet Union, Germany, Japan, and finally led the Indian National Army in the battle with the British forces on the Burma border, scoring early victories against the imperialist army.

Honouring his legacy this week, months ahead of the elections due in April-May, the central government declared that his birth anniversary on January 23 will be marked as “Parakram Diwas or Courage Day”.

Both the centre and the Bengal government will begin yearlong celebrations on the day to mark Netaji’s 125th birth anniversary year. Prime Minister Narendra Modi is expected in Kolkata on Saturday to join celebrations. Bengal Chief Minister Mamata Banerjee will hold a march in the city.