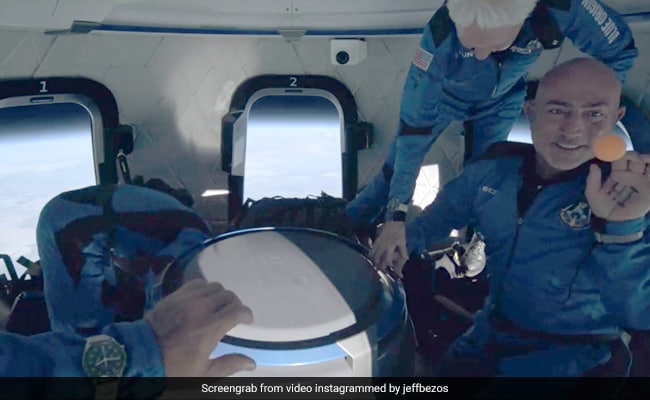 Jeff Bezos flew to the cusp of outer space on Tuesday.

Tech billionaire Jeff Bezos created history on Tuesday when he and a crew of three others travelled to the edge of space and back. The founder of Amazon made the trip in a spacecraft developed by his company, Blue Origin. The two-decade-old space company developed a spacecraft called the New Shepard. Jeff Bezos was accompanied on the flight by his 53-year-old brother, Mark Bezos, 82-year-old aviation pioneer Wally Funk, and 18-year-old Oliver Daemen. The world was able to witness the historic moments through a live webcast.

The spacecraft carried the crew to the Karman Line, which is considered to be the edge of space and is located at an altitude of 100 kilometres above the Earth. And as the crew experienced zero gravity, the team of four were seen floating within the capsule in awe of the moment. However, it was Jeff Bezos’ comment involving a popular candy that had people across the world in splits.

After the capsule separated from the booster, the crew unbuckled, performing back flips and tossing each other Skittles candy in weightlessness.

In a video shared by Jeff Bezos on Instagram, he can be heard asking “Who wants a Skittle?”

The video also features Mark Bezos and Oliver Daemen playing catch, while Wall Funk exclaims, “Fantastic.” The moment grabbed eyeballs on social media and was also shared on other platforms.

Blue Origin video from inside the New Shepard capsule in space:

The candy manufacturer, too, responded to a news report on the incident. A tweet by the official page of Skittles reads, “We are honoured to have heard Skittles were aboard Blue Origin Rocket. Jeff Bezos, is it true Skittles taste better in space?”

We are honored to have heard SKITTLES were aboard #BlueOrigin ????@JeffBezos is it true #SKITTLES taste better in space?https://t.co/PPdYf6BVCZ

Reacting to the video of Mr Bezos, one user described it to be a “space skittle party”.

“Not going to lie, this looks like so much fun,” said another user.

The video also had many users craving some Skittles.

“Does this mean we might get a Space Skittles pack?” asked another user.

Does this mean we might get a Space Skittles pack? I seriously hope so

Tell us what you think of the video.