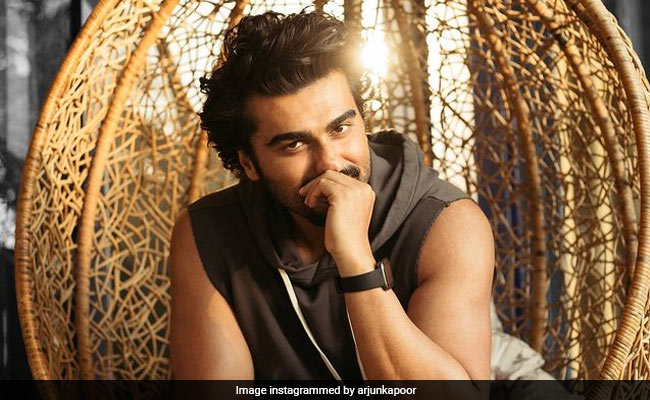 Actor Arjun Kapoor, on Monday, dropped two new pictures of himself from one of his recent photoshoots on Instagram. In the caption of the post, the actor asked his Instafam to “spot the difference,” between the two pictures and guess who nailed spotting the difference? Arjun’s sister and actress Janhvi Kapoor. Both the pictures capture Arjun sitting on a hanging swing chair hammock with his one hand resting on his nose. While the first picture features Arjun sporting a smile, the other one features him sporting a serious look on his face. “Can you spot the difference,” Arjun wrote in the caption of the post. In her comment, Janhvi compared Arjun’s expressions in the pictures to the time when the two spend some time together and Janhvi performs Kathak in front of Arjun. “First photo is when you think I’m done doing kathak by the dining table second photo is when I start again,” Janhvi wrote in the comments section of the post.

Impressed by Janhvi’s interpretation of the two pictures, Arjun replied to Janhvi’s comment and wrote, “waaah.” Besides Janhvi, several fans of Arjun Kapoor also attempted to the spot the difference between the two pictures of the actor. Many other fans dropped heart and fire emojis in the comments section of the post.

Daughter of late actress Sridevi, Janhvi Kapoor is a trained Kathak dancer. Videos of Janhvi performing Kathak on different Bollywood tracks have many times gone viral on the Internet.

Earlier on Sunday, Arjun Kapoor was spotted celebrating Easter with his girlfriend and actress Malaika Arora. Arjun and Malaika celebrated the festival of Easter at Malaika’s mom Joyce Arora’s residence.

Check out some pictures of the couple here:

Janhvi Kapoor shared a stunning picture of herself with her sister Khushi Kapoor on Instagram on Sunday. Janhvi is currently holidaying in New York, where Khushi is pursuing her education.

Facebook
Twitter
Pinterest
WhatsApp
Previous articleRedmi Note 10 Will Go on Sale in India Today via Amazon, Mi.com: Price, Specifications
Next article5-Year-Old Daughter Of Commando Pleads For His Release From Maoists

<!-- -->More than 910 million Covid-19 vaccine doses have been given and the number is climbing daily. So far, though, the vast majority...
Read more
Top Stories