Home Blogs It was an 'insult', we'll take out tractor march on R-Day: Farmers...

It was an ‘insult’, we’ll take out tractor march on R-Day: Farmers after round 11 of talks with govt 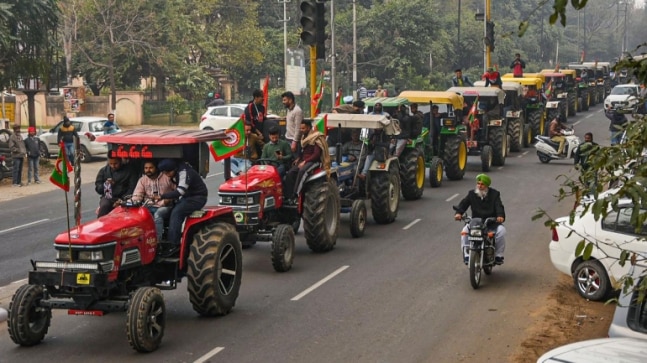 The 11th round of talks between protesting farmers’ unions and the central government remained inconclusive with the farmers’ leaders announcing that they would go ahead with their proposed tractor march on Republic Day.

After the meeting ended, farmers’ leaders said they felt “insulted” by the manner in which the ministers treated them.

“The minister made us wait for three-and-a-half-hours. This is an insult to farmers. When he came, he asked us to consider the government’s proposal and said that he is ending the process of meetings,” SS Pandher of the Kisan Mazdoor Sangharsh Committee told news agency ANI.

He added that the farmers’ agitation will continue peacefully.

The minister made us wait for three & a half hours. This is an insult to farmers. When he came, he asked us to consider the govt’s proposal & said that he is ending the process of meetings… The agitation will continue peacefully: SS Pandher, Kisan Mazdoor Sangharsh Committee pic.twitter.com/J1ppwGfHCn

Speaking about Friday’s meeting with the central government, Rakesh Tikait said, “The government offered to put the implementation of the farm laws on hold for two years and said that the next round of meeting can take place only if farmers’ unions are ready to accept the proposal.”

The farmers’ unions had already rejected this proposal made by the government prior to the meeting.

Despite 11 rounds of talks between the farmers and the government, there are no signs of the deadlock ending anytime soon. The situation so vexed at present that there is no clarity on if and when the next round of talks will be held between the two sides.

“No date for the next meeting has been fixed by the government,” said Surjeet Singh Phul, state president of BKU Krantikari (Punjab).

Sources privy of today’s developments said during the meeting with farmers’ unions, Union agriculture minister Narendra Singh Tomar “yelled” that putting the farm laws on hold for 18 months is the best offer that the government can make.

Farmers’ leader Rakesh Tikait however said the unions will be meeting once again to discuss the government’s proposal amongst themselves.

He added that while the farmers’ unions will meet to reconsider the government’s proposal, they stand firm on their demand that the farm laws should be completely repealed.

Meanwhile, Union agriculture minister Narendra Tomar said the government has asked the farmers’ unions to get back with their decision on its proposal by Saturday.

“The government always maintained it is ready to consider alternatives to repeal. Our proposal is in the interest of farmers and of the country,” Tomar said.

He added that the government gave many proposals to end the protest, but “no resolution is possible when sanctity of agitation is lost”.

The agriculture minister also alleged that some external elements are trying to fan the ongoing agitation.

(With inputs from agencies)