IT Minister Cuts Short Pegasus Statement In Parliament Amid Protests 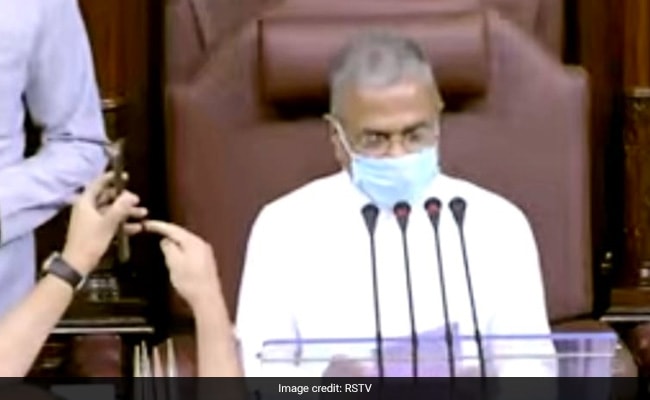 The Rajya Sabha was adjourned twice as MPs trooped into the Well of the House holding placards.

High drama continued in both the Lok Sabha and Rajya Sabha for the third straight day of the monsoon session today as opposition MPs staged protests over a range of issues, including the Pegasus snooping controversy. Electronics and Information Technology Minister, Ashwini Vaishnaw,  was forced to cut short his statement on Pegasus amid uproar by the opposition members.

Both were adjourned twice — first till 12 noon and then till 2 pm — as MPs trooped into the Wells of the House raising slogans and holding placards. “Members seem to be not interested in discussing people’s issues,” Rajya Sabha Chairman M Venkaiah Naidu said, adjourning the proceedings in the upper house.

In the Lok Sabha, Bhartruhari Mahtab, who was in the Chair, was forced to adjourn for a second time — the Question Hour barely lasted 12 minutes before Speaker Om Birla adjourned the House till 12 noon — after protesting members ignored his plea to return to their seats and engage in discussion.

While leaders from the Congress and Shiromani Akali Dal targeted the government on the contentious farm laws, Trinamool Congress members gathered near the Speaker’s podium raising the Pegasus snooping issue. They raised slogans and sought answers from the Prime Minister.

The protests continued despite Parliamentary Affairs Minister Prahlad Joshi saying the government was ready to discuss any topic. “Rajya Sabha had a discussion on Covid…We are ready for discussion on whatever topic you want…Question Hour is a right of every member,” Mr Joshi said according to a PTI report.

As soon as the House assembled, Congress leader Digvijaya Singh tried to raise the issue of the raids. Other opposition members, including those from the Trinamool, rushed into the well over the alleged targeting of political rivals, journalists, and critics for surveillance.

“I have not permitted you. You have to seek permission from me. Nothing shall go on record,”
Rajya Sabha Chairman M Venkaiah Naidu told Mr Singh as he began speaking.

“This is not the way,” Mr Naidu said and called for the tabling of listed papers, although only one could be laid out before the House was adjourned amid continuing protests.

Facebook
Twitter
Pinterest
WhatsApp
Previous articleDid France President Emmanuel Macron Ask Those Refusing Vaccine To Stay Home A Fact-Check
Next articleAirtel launches new plans postpaid plans for retail and corporate customers: All details of what has changed and what not