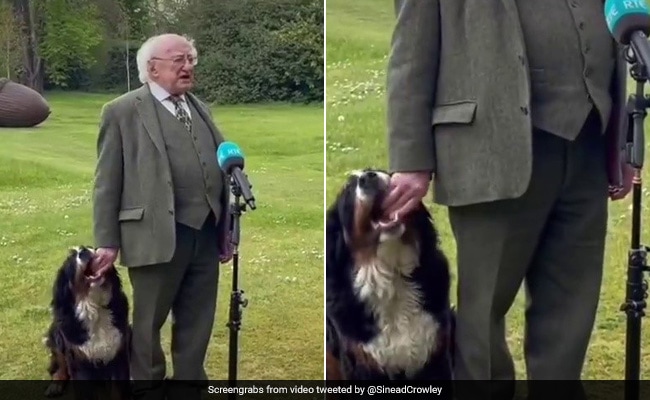 A video of the President of Ireland’s dog interrupting his address to a news channel to demand attention is winning hearts on social media. President Michael D Higgins was delivering a tribute to actor Tom Hickey, who died on Saturday, when one of his two Bernese mountain dogs walked up and sat by his side, begging to be played with.

Misneach, the seven-month-old puppy, stole the limelight as the president spoke to Irish broadcaster RTE. He playfully bit the president’s hand, pawed at his legs and kept up a constant demand for attention. President Higgins kept his focus on the address, but he did offer up his hand to the dog to play with.

A video of the moment was put on the president’s official TikTok page, where it has gone viral. On Twitter, where the video soon made its way, it has been watched by more than 1.6 million people.

There was a lot going on in our @rtenews interview yesterday #rtenewsbehindthescenes@PresidentIRL@PaulDeighanopic.twitter.com/2zaJo3fRiY

Since being posted two days ago, the clip has garnered over 18,000 ‘likes’ and hundreds of comments on the microblogging platform.

Love the way President Higgins is so relaxed with his puppy and continues his speech.

Irish President Michael D Higgins adopted Misneach earlier this year. The puppy has a companion in Brod, the president’s other pet dog. The two dogs have quite a number of fans on social media, where their pics and videos surface periodically.

President Higgins taking his dogs Bród and Misneach for a stroll. pic.twitter.com/kJdHD7NWLV

Meanwhile, the president of Ireland is not the only politician who is fond of animals. Here is a look at some other powerful political pets.