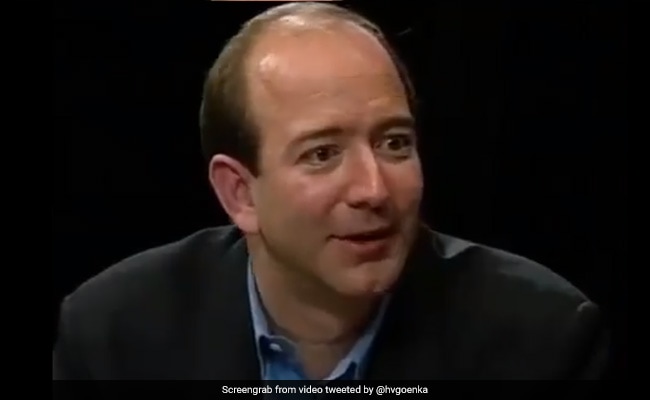 Jeff Bezos spoke about exploring space in a two-decade-old interview.

Founder and former CEO of Amazon, Jeff Bezos, created history recently when he travelled to the edge of space with three others. The tech billionaire made the journey in a rocket built by his company, Blue Origin. That Mr Bezos has an interest in outer space is evident from the time and effort that the entrepreneur has put into his space endeavours. And now a video has revealed that this journey to space was a dream that Mr Bezos had nurtured for years and one that he, for long, thought was too far-fetched. A clip from Mr Bezos’ two-decade-old interview with television journalist Charlie Rose is now going viral on social media and features the entrepreneur discussing his dreams.

When asked what he “would like to do or be” if he was not the CEO of Amazon, Mr Bezos said, “If I could do anything, and it turns out this is a very hard technical problem, I would like to help go explore space,” adding that he was not holding out great hopes given how implausible it seemed. When prodded further, he said, “I would get in a rocket ship, go up into space, and go check out a few things.”

People in the audience can be heard laughing at his response.

To this, Mr Rose said, “If you put your mind to it, you could probably figure out a way,” adding, “Your board of directors and  stock owners may not be happy.”

Mr Bezos, replied rather candidly, “It is really hard.” However, he added, “Who knows; 20 years from now there are significant changes in technology; maybe such things will get easier.”

The video caught the attention of Twitter users in India after it was shared by businessman Harsh Goenka. Sharing the clip, he said, “Jeff Bezos interview in 2000. Everyone laughed at that time when he said he wanted to explore space.” It has received over 36,200 views in less than 24 hours.

Jeff Bezos interview in 2000.
Everyone laughed at that time when he said he wanted to explore space… #vision#intentpic.twitter.com/MHSmjVy1It

Replying to Mr Goenka’s tweet, one user said, “Mediocre people have always laughed at geniuses in the beginning.  That’s what they do…”

Mediocre people have always laughed at geniuses in the beginning. That’s what they do. They also laughed at Bill Gates and at Steve Jobs. The way Elon Musk’s rockets get back to earth would have been laughable until it happened.

“What a guy, lived his dream,” said another user.

What a guy, lived his dream, what he thought off was very difficult technical problem.

A comment described Mr Bezos to be a “true visionary”.

He is a true visionary, hence just 20 years later he could do what he intended! https://t.co/obb2hPlumn

“People don’t believe until it’s done,” read one of the comments.

One user wrote, “It is testimony to the fact that anything which a mind can think is possible.”

It is testimony to the fact that anything which mind can think is possible…It’s only a matter of time, grit & perseverance https://t.co/flORrzVM45

Mr Bezos was accompanied on the New Shepard spacecraft by his brother Mark Bezos, aviation pioneer Wally Funk, and a high school graduate Oliver Daemen. The spacecraft travelled to the Karman Line, an imaginary line located at an altitude of 100 kilometres above the Earth and considered to be the edge of space.