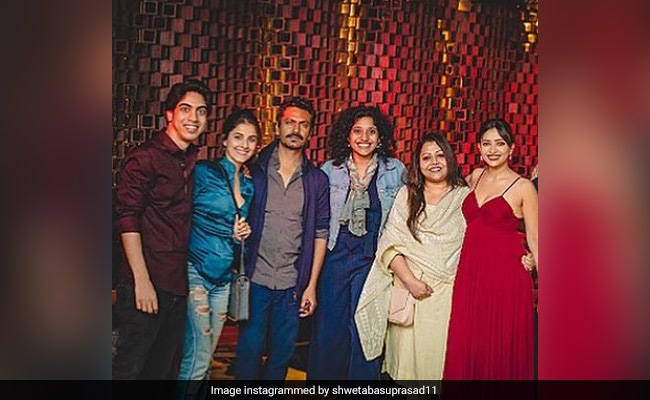 Actress Shweta Basu Prasad rang in her 30th birthday with a grand party in Mumbai this week. The actress, who has starred in several movies and web-series, celebrated her special day with her friends and colleagues from the entertainment industry. Shweta shared pictures from her birthday bash on early Wednesday, in which she can be seen having lot of fun with her Serious Men co-stars Nawazuddin Siddiqui and Indira Tiwari, filmmaker Madhur Bhandarkar, actress Sanya Malhotra, Comedy Couple co-star Saqib Saleem, Mirzapur actresses Harshita Gaur and Isha Talwar, as well as actor Akshay Oberoi among many others. In the photos, Shweta Basu Prasad looks every bit of gorgeous in a red dress.

In one of her birthday posts, Shweta Basu Prasad wrote a note about turning 30: “I am not sure why are people so scared of turning 30. It’s a great age. Today, I am the best version of myself yet. I love my job, financially independent, spiritually aligned and single.” She added: “There’s a weird misconception in society that aging is problematic. Most people are so scared to embrace their age. While age is just a number, it’s also years of learning, unlearning, acknowledging, overcoming, loving, forgiving, adulting and everything beautiful life has to offer.”

Shweta Basu Prasad, best-known for her performance as a child actor in the 2002 film Makdee, has worked in films like Mard Ko Dard Nahi Hota, The Tashkent Files, Serious Men and Comedy Couple. She has also starred in series such as Kahaani Ghar Ghar Kii, Karishma Kaa Karishma, Hostages and High. For her role in Makdee, Shweta even won the National Film Award for the Best Child Artist.

<!-- -->"Farmers are the same people who wait for five months to grow an eggplant," Mr Noah said in jest.New Delhi: If the...
Read more