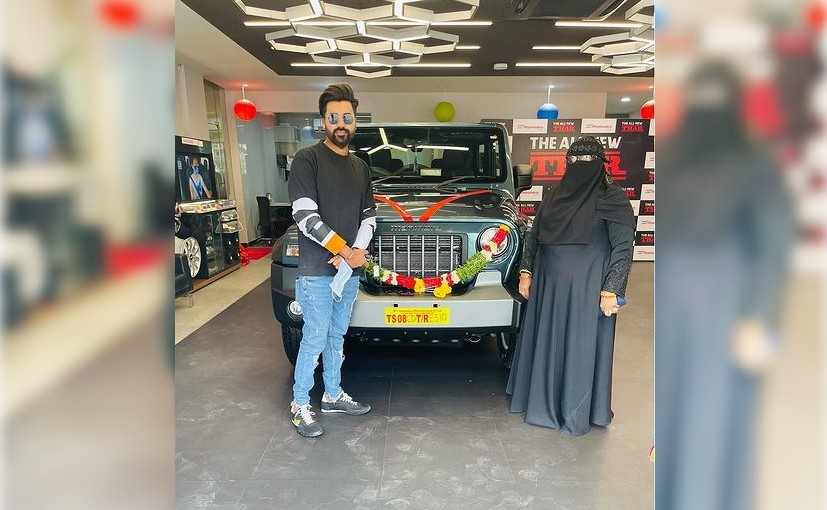 Indian cricketer Mohammed Siraj recently took delivery of his Mahindra Thar and is the third of six players who are to receive the off-roader as a special gift from Anand Mahindra for their performance during the India-Australia Test series.

The six Mahindra Thar SUVs promised by M&M Chairman Anand Mahindra are finally reaching the players of the Indian cricket team. After T Natarajan and Shardul Thakur, Indian fast bowler Mohammed Siraj recently took delivery of his Thar. Finished in a grey shade, the cricketer took to social media to share an image of his newest prized possession, which was received by his mother and elder brother and manager Ayan Mirxa, since Siraj is away for the 2021 Indian Premier League (IPL).

In a post on Instagram, Mohammed Siraj wrote, “Words fail me at this moment. There is nothing I can say or do that will adequately express how I feel about your beautiful gift. For now, I’ll just say a big fat thank you.”

Siraj is one of the six cricketers who was gifted the Thar SUV by Anand Mahindra for their incredible performance during the India-Australia Test series down under. The Indian cricket team during the series, mostly comprising young players making their debut who showed incredible grit and determination to take the historic win. Apart from Siraj, Natarajan and Thakur, cricketers Washington Sundar, Shubman Gill and Navdeep Saini have been awarded the Thar. They are yet to share details about their respective off-roaders.

Soon after the test series win, Anand Mahindra had taken to Twitter to acknowledge the performance of the young cricketers. At the time, he wrote, “Theirs are true ‘Rise’ stories; overcoming daunting odds in the pursuit of excellence… It gives me great personal pleasure to gift each of these debutants an All New THAR SUV on my own account – at no expense to the company.”

The reason for this gift is to exhort young people to believe in themselves & ‘Take the road less traveled.’ Bravo Mohammed, Shardul, Shubhman,Natarajan,Navdeep & Washington! I now plead with @Mahindra_Auto to get them their THARS on priority. (3/3)

The Mahindra Thar was launched last year as the brand’s halo product and is deeply connected to the automaker’s roots. The off-roader is built on a completely new platform with new petrol and diesel engines, as well as the option of an automatic transmission for the first time. Prices for the Thar currently start at ₹ 12.10 lakh (ex-showroom, Delhi).

<!-- -->Some of the 24COVID-19 patients who died in the tragedy were recovering, said relativesNashik, Maharashtra: Family members could not contain their tears...
Read more
Top Stories