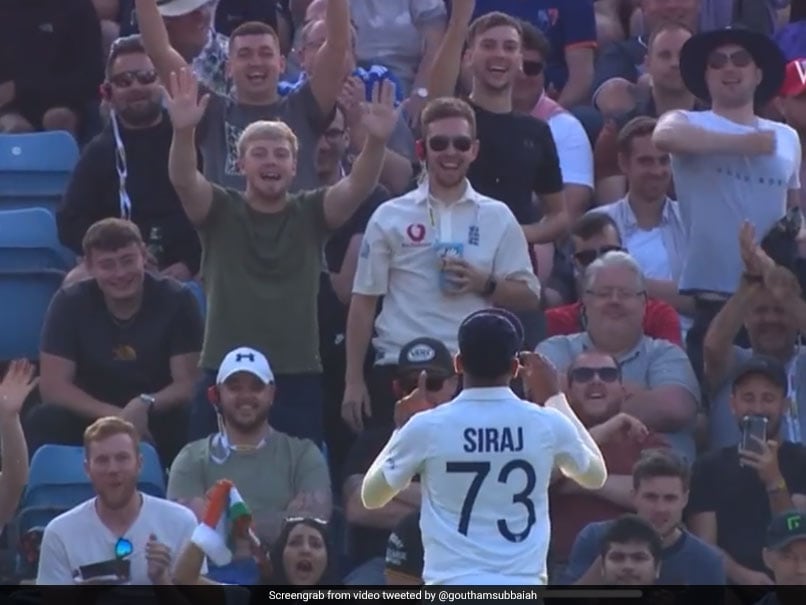 Mohammed Siraj engaged in a banter with England fans at Headingley on Day 1 of 3rd Test.© Twitter

India had a tough day in the office on Wednesday as they were bowled out for 78 in the third Test at Headingley after Virat Kohli won the toss and opted to bat. England openers Rory Burns and Haseeb Hameed then added to India’s agony as they put on an unbeaten 100-plus-run stand to finish Day 1 with a lead of 42 runs. During England’s innings, Mohammed Siraj responded to a section of English fans while fielding in the deep by gesturing 1-0. After the day’s play, a clip went viral on social media in which the India seamer can be seen gesturing to the crowd ‘1-0’ after receiving a bit of stick from them.

On Wednesday, a ball was also thrown at Siraj in the final session of Day 1.

India wicketkeeper-batsman Rishabh Pant said during the post day press conference that fans had thrown a ball towards Siraj.

“I think, somebody (from the crowd) threw a ball at Siraj, so he (Kohli) was upset,” Pant was quoted as saying by news agency PTI.

On Day 1, nothing went India’s way after the toss as the batsmen went down like ninepins.

The decision to bat backfired instantly as Anderson sparked a top-order collapse by dismissing KL Rahul, Cheteshwar Pujara and Kohli, leaving the visitors reeling at 21 for three.

Ajinkya Rahane and Rohit tried to steady the ship, but Rahane fell at the stroke of lunch.

Ollie Robinson, Craig Overton and Sam Curran then blew away the middle and lower-order to bowl out India for 78.

With the bat, Hameed and Burns started cautiously and put on an unbeaten 120-run opening stand.

Both England openers scored unbeaten half-centuries to put the hosts in a commanding position at Stumps.

Scotland players celebrate their win over Bangladesh in the T20 World Cup on Sunday.© AFPScotland stunned Bangladesh by six runs in their Group B...
Read more
Sports

IND vs ENG, India vs England, When And Where To Watch Warm-Up Match: Live Telecast, Live Streaming