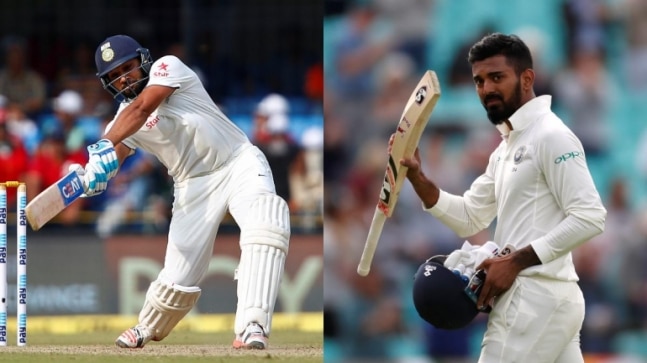 Talking about the team combination of the Indian Test team in the absence of Virat Kohli, veteran India off-spinner Harbhajan Singh said that he would want Rohit Sharma to open and KL Rahul to fill the India captain’s slot.

India captain Virat Kohli will return back to India after the completion of first Test against Australia which starts in Adelaide from December 17. The 32-year-old will be on a paternity leave as he is expecting the birth of his first child with wife and actor Anushka Sharma in January.

Virat kohli is a modern day great and his absence will surely be felt in the remaining 3 matches. The famous Indian batting line-up will be tested by a lethal pace attack consisting of Mitchell Starc and Pat Cummins. A question over India’s batting line-u in the absence of Virat Kohli is looming.

Rohit Sharma, who is currently rehabilitating at NCA and recovering from a hamstring injury, is expected to join the team before the start of the first Test. KL Rahul is back in the Test squad after a gap of over one year, while Cheteshwar Pujara has not played any form of professional cricket since March 2019. The scenarios have made the question of team combination even more important.

Veteran India off-spinner Harbhajan Singh in an exclusive interview with India Today’s Consulting Editor Boria Mazumdar has said that he would not change the opening combination. The 40-year-old added that “quality” batsman KL Rahul is someone who can bat at any position, suggesting that “he can fill that slot (number 4) for Virat Kohli.”

“I would not change the opening combination, Rohit Sharma should open in Australia and KL Rahul can fill that slot for Virat Kohli. Rahul is too good a player to bat at No. 3, 4, or even open. It will not make a huge difference if he bats at No. 3 or opens because he is a quality player,” Harbhajan Singh told on India Today’s show ‘Inspiration’.

Harbhajan Singh, who himself holds a brilliant record against the mighty Australians, reckoned that India bowlers will be aching to ball with the Pink ball in Australia.

“Both the teams will be starting from scratch and it will come down to who plays the better cricket and who will bowl better. The pink ball seams around a lot when its new but once the seam settles down it gets easier to bat. Our seamers will be looking forward to bowl with the pink ball because India has got a great lineup. Mohammed Shami, Jasprit Bumrah, Ishant Sharma and the others can do the damage which Australia will also look to do,” Harbhajan Singh said.

Delhi set to record coldest November in at least a decade: IMD

Delhi is all set to record coldest November in at least 10 years, with a minimum temperature for this hovering around 10 degrees...
Read more
Random