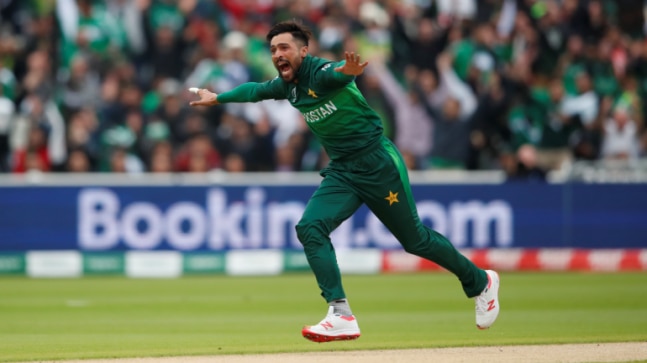 
Veteran fast bowler Mohammad Amir, on Wednesday, September 21, became father to a baby girl. The speedster uploaded an adorable picture of his newborn baby to show his joy and delight. Going by Amir’s post, his daughter’s name is ‘Ayra Amir’ He captioned the picture and wrote, “Alhumdulillah we are blessed with a baby girl ayra amir.”

Thereafter, a number of cricketers from Pakistan wished him on the happy moment. Wahab Riaz, Sarfaraz Ahmed, Kainat Imtiaz, Fatima Sana, Ahmed Shahzad, Kamran Akmal, Sharjeel Khan and many others sent their wishes for Amir.

Back in September 2016, Amir tied the knots with British citizen Narjis Khan. The couple already has two daughters, Minsa Amir and Zoya Amir.

Alhumdulillah we are blessed with a baby girl ayra amir. pic.twitter.com/pW5y47JvUM

Amir recently plied his trade for Jamaica Tallawahs in the 2022 edition of the Caribbean Premier League (CPL). In nine matches, the left-arm seamer picked up 13 wickets. His best bowling figures of 3/22 came against Guyana Amazon Warriors in St Kitts.

Amir was one of the most talented cricketers around the world when he forayed at the international level. However, after the spot-fixing scandal in 2010, Amir had to stay out of cricket. However, he made his comeback in the 2016 Asia Cup in Bangladesh, where he rattled the best of batters.

He last played for Pakistan back in August 2020 during their tour of England. In 36 Tests, 61 ODIs and 50 T20Is, Amir has picked up 119, 81 and 59 wickets respectively, with five five-wicket hauls and eight four-wicket hauls to show for his efforts.