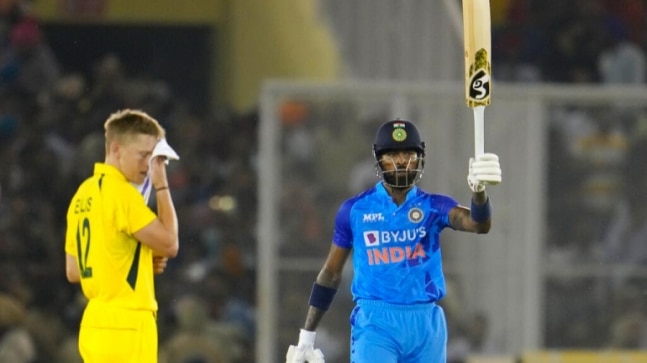 Hardik Pandya put on a masterclass of six-hitting en route to his career-best unbeaten 71 to help India post 208 for 6, their highest T20I total against Australia in the series opener in Mohali on Tuesday. Hardik was delighted after finishing the Indian innings with a hat-trick of sixes and recording his career-best T20I score in Mohali.

India started off well with both Rohit Sharma and KL Rahul playing some lusty blows, but Josh Hazlewood struck early to remove Rohit. Virat Kohli, who walked in to bat at no.3, followed the Indian captain as Nathan Ellis prized him out for only 2.

Rahul and Suryakumar Yadav started to steady the ship and forged a solid partnership of 68 runs for the third wicket. Rahul then struck his 18th T20I half-century while also becoming the fifth Indian batter to score 2000 runs in T20Is.

Rahul then departed for a well-made 55 and Yadav couldn’t stay in much longer as he fell short of his half-ton by four runs. Then came Hardik Pandya and he absolutely blew away the bowlers. He got to his half-century in just 25 balls and helped India go over the 200-run mark. India finished brilliantly and scored 60 runs in the last four overs thanks to the clean hitting from Pandya, who finished on 71 off just 30 balls.

“Looks like a good pitch. It took some time to get used to the bounce of the pitch. I have played here in the IPL and I knew the shots that work here. I used my experience. I always work on hitting on both sides of the ground and get into good positions. Fortunately, the ball was in the areas where I could hit it for sixes. Glad they came off the middle of the bat,” Rahul told the broadcasters in the innings break.