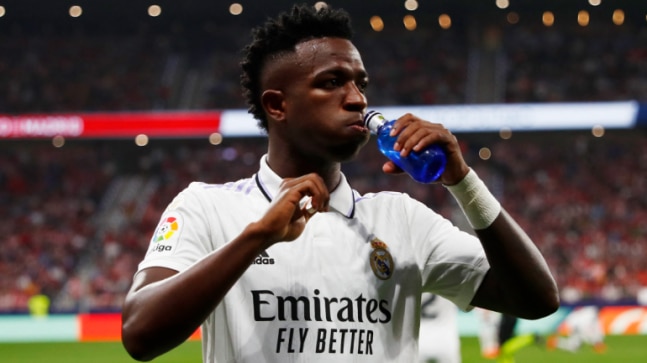 A LaLiga spokesperson has said that the league condemns the actions by the Atletico Madrid fans after Vinicius Jr suffered racial abuse on Sunday. The Brazilian forward was subjected to racial abuse inside the stadium as well.

Vini Jr. was subjected to racial abuse during the Madrid derby (Courtesy: Reuters)

The LaLiga has condemned the hate speech after Atletico Madrid fans were filmed racially abusing Real Madrid’s Vinicius Jr. ahead of the Madrid derby on Sunday.

Vinicius Jr. has been in the spotlight after his actions during Madrid’s win over Mallorca last week and was once again the centre of attraction ahead of the derby. Many Atletico fans were filmed slinging racial abuse at the Brazilian in a video published by radio station Cope in the buildup to the match.

Spanish media had also reported that noises and chants of “Vinicius, die” were heard throughout the game.

A LaLiga spokesperson has now told the BBC, as quoted by Reuters, that the league denounces all incidents inside and outside of the stadiums and said that they work with the clubs to keep football friendly and enjoyable.

The spokesperson also said that hate speech has no place in LaLiga.

“We denounce all incidents inside and outside stadiums,” a LaLiga spokesperson told the BBC. “We work with clubs to keep our football friendly and enjoyable.

“Hate speech has no place in LaLiga and we always work with the clubs and the authorities to identify and bring to justice any such case.”

Atletico didn’t comment on the situation immediately but said on Twitter to their fans to respect their opponents and support the team with passion.

“Support Atleti with passion and respect for opponents.”

Vinicius Jr. was in good form for Real Madrid in the game against Atletico and played a huge role in their derby win. He setup the second goal for Los Blancos as he made a dazzling run into the box and his shot rebounded off the post into the path of Federico Valverde.

Before the match, the Brazilian had said that he wouldn’t stop dancing after scoring a goal as he is celebrating the diverse culture in the world.