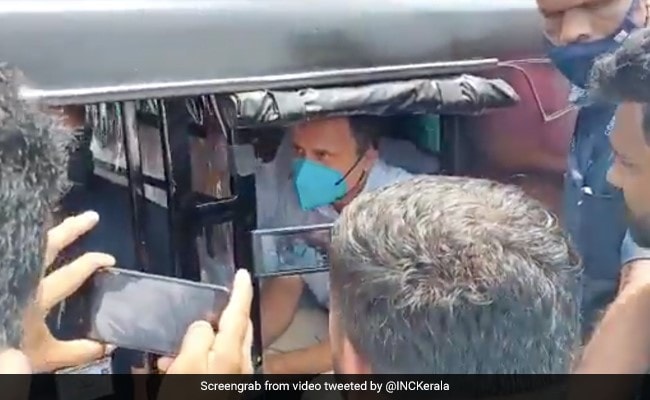 Kerala Election: Rahul Gandhi took an autorickshaw to the venue, catching everyone by surprise.

Congress leader Rahul Gandhi on Sunday took an autorickshaw ride at two places in Kerala, on the last day of campaign for the April 6 Assembly polls, to highlight the rising fuel prices under the BJP-NDA rule.

Mr Gandhi, who addressed a campaign meeting at Nemom, Thiruvananthapuram in the evening, took an autorickshaw to the venue, catching everyone by surprise.

K Muraleedharan, MP, is the Congress-led UDF candidate at Nemom, the lone seat won by the BJP in the 2016 assembly polls.

The constituency is witnessing a fierce triangular fight between the LDF, UDF and the BJP.

Addressing party workers at Nemom, Mr Gandhi, who also took out a roadshow, said he came in an autorickshaw.

Shri. @RahulGandhi rides an auto on his way to the helipad at Kalpetta,Wayanad.#UDFWinningKeralapic.twitter.com/1ZugmuIiBX

The driver of the vehicle said he was not able to make a livelihood as all his earnings go to pay for fuel.

“The BJP keeps raising thepetrol and diesel prices and giving their money to their friends. How dare they come here and ask you for votes?”, an angry Mr Gandhi asked.