In A First, Nine Supreme Court Judges Take Oath In One Go 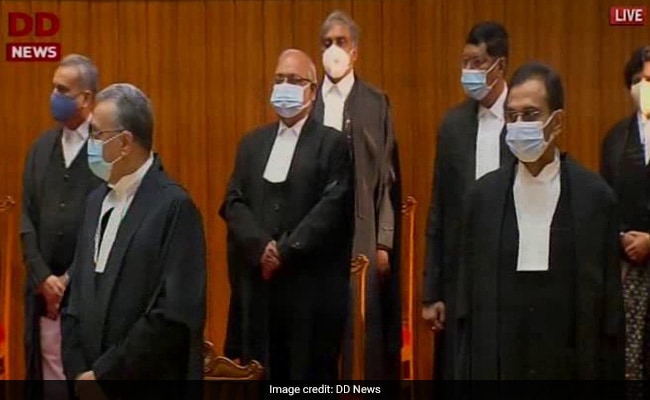 Nine new Supreme Court judges, including three women, were administered their oaths of office by Chief Justice NV Ramana this morning. This is the first time in the history of India’s highest court that nine judges have been sworn in at one time.

The ceremony was held in the auditorium of the Court’s additional building complex; traditionally it is administered in the chief justice’s court room.

Justice BV Nagarathna (formerly a judge in the Karnataka High Court) was also sworn in. Justice Nagarathna is in line to become India’s first woman chief justice in September 2027. She is the daughter of former Chief Justice ES Venkataramiah.

With the addition of these nine judges the strength of the Supreme Court stands at 33, including the Chief Justice, out of a sanctioned strength of 34.

Aside from Justice Nagarathna, two others are also in line to become Chief Jusitce of India, per their seniority levels. They are Justice Vikram Nath and PS Narasimha.

Facebook
Twitter
Pinterest
WhatsApp
Previous articleGoogle’s future Chrome update may make gaming in your browser more advanced
Next articleOnePlus may soon have another affordable option for TWS earbud buyers: What we know so far