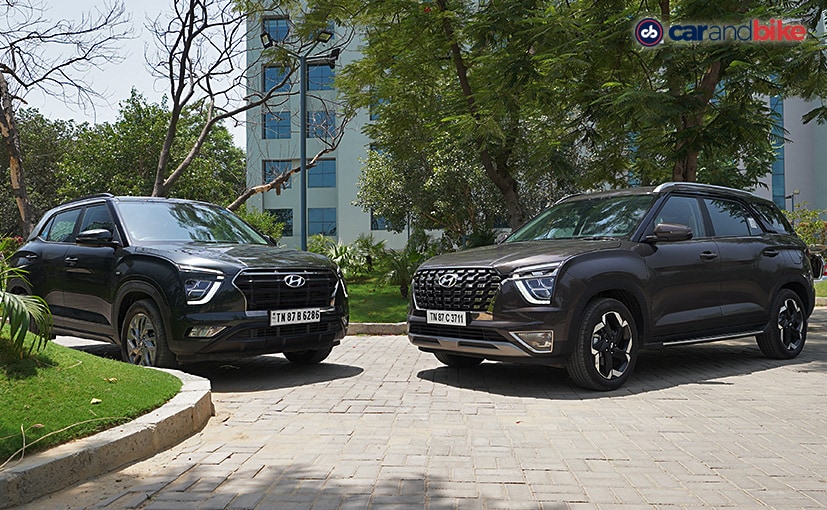 Ever since the new-generation Hyundai Creta made its global debut in the iX25 avatar at the Shanghai Auto Show back in 2019, we knew about its three-row derivative coming our way as well at some point. Afterall, the Hyundai-Kia scalable K2 platform that underpins the Creta and a host of other SUVs globally, was designed to spawn even bigger models. Well! The Alcazar is that SUV and you have heard us saying that it is more than just a three-row Creta. Today, we tell you how different both are.

The Hyundai Alcazar gets a more imposing front-end compared to the Creta, while the profile and rear of the Creta is more radical.

It’s not just what the MG Hector Plus is to Hector or the Tata Safari is to Harrier. With the Alcazar, Hyundai actually went the extra mile and modified its platform making it fairly accommodating for six or seven and powerful enough to carry that much load with ease. Then, if you got two models coming out of the same platform it is important to have styling changes which evidently make the two SUVs look different. It has been achieved to a certain extent, and a major difference is the front end. 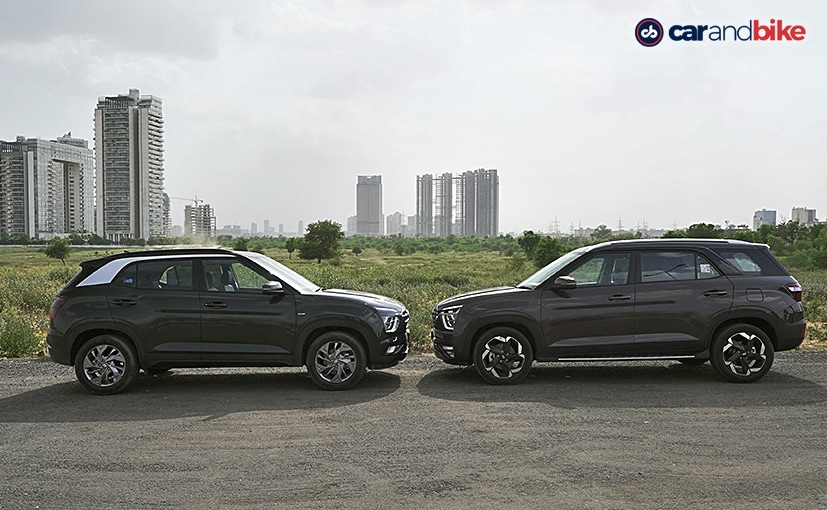 The profile of the Alcazar extends 200 mm longer than the Creta’s adding a D-Pillar 150 mm of it in in the wheelbase.

The Hyundai Creta’s grille is not small to begin with, but the one on the Alcazar covers almost 70 per cent of its front, adding to its imposing looks. It has been stretched out going all the way into the headlamp cluster and the finish is completely different, and so is the styling. The one on the Alcazar is finished in dark chrome, while Creta gets regular chrome inserts. But those aren’t the only differences, there is a whole lot of other things as well so let’s quickly run you through the rest. The profile extends 200 mm longer than the Creta’s adding a D-Pillar, 150 mm of it is in the wheelbase. The stretched section has a nicely sculpted hump going with its SUV looks, while in the Creta there is a contrast finish running along the roofline and merging with the C-Pillar. 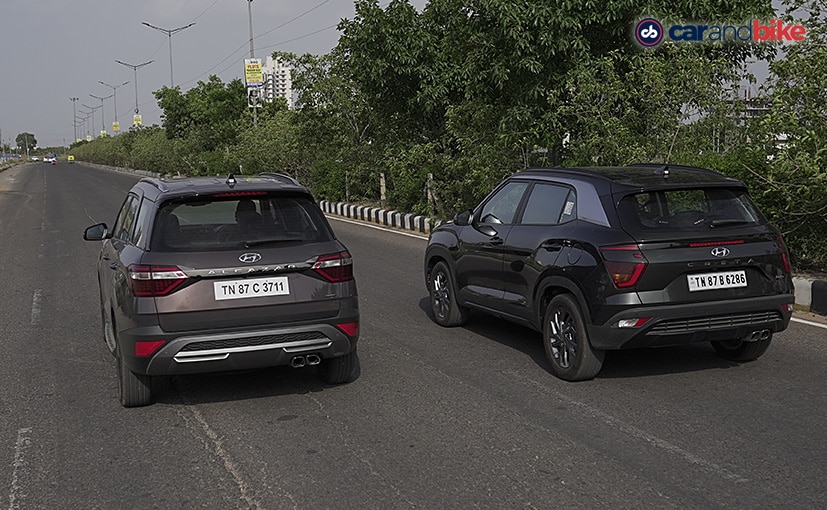 The rear of the Alcazar looks slightly inspired by the Ford Endeavour and looks more streamlined, while the Creta looks a bit busy at the rear.

But at the rear, the Alcazar is significantly different. It’s simpler with lesser contours and larger glass area and I personally prefer this rear end over the Creta’s that looks busy. The styling too me, seems inspired by the Ford Endeavour and that’s not a bad thing. Then, the Alcazar also sees addition of a running footstep. The top-end trim gets these stylish 18-inch two-tone alloy wheels, while the base Prestige trim gets 17-inchers. The Creta on the other hand gets 17-inch alloy wheels on the top-end and 16-inchers on lower trims. 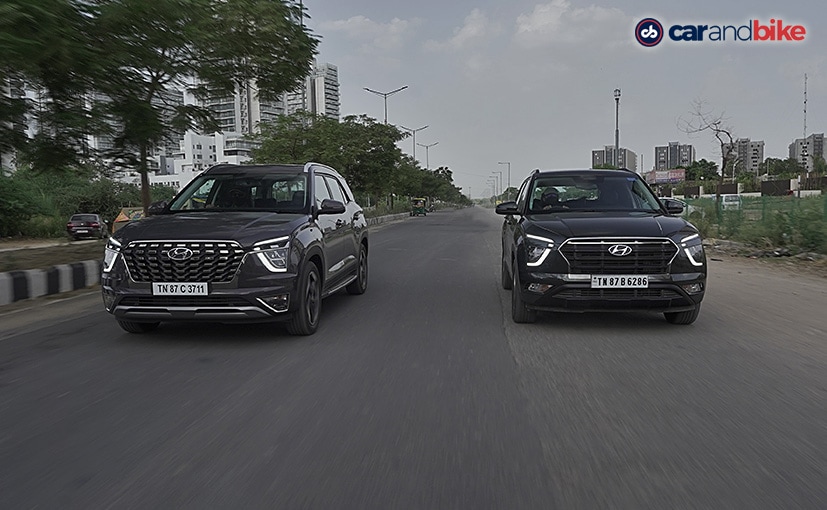 And now coming to one of the most substantial differences between them and let’s starts with the Alcazar because it’s easier to get your head around it. You can have it with either of the two engines- the 2.0-litre, four-cylinder petrol or the 1.5-litre, four-cylinder diesel. The petrol motor is the Hyundai Tucson derived one and here it belts out 157 bhp and 191 Nm of peak torque. It is available with both six-speed manual and torque convertor Automatic, both giving a fuel efficiency of around 14.5 kmpl and the manual clocks triple-digits in 9.5 seconds. The diesel mill comes straight up from the Creta and here is churns out 113 bhp and 250 Nm, and is also offered with both six-speed manual and automatic transmissions. The manual also offers best fuel efficiency of 20.4 kmpl among all variants while the automatic delivers 18.1 kmpl which still is decent.

Also Read: Hyundai Alcazar: Which Variant Should You Buy? 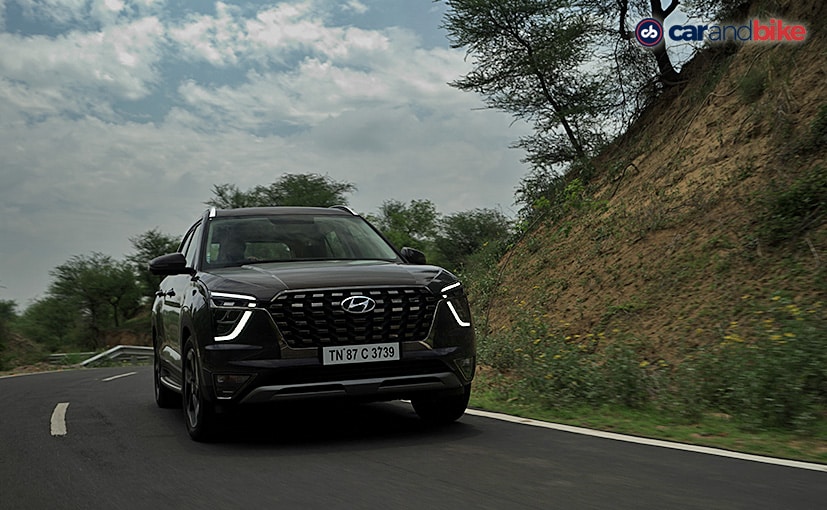 The Hyundai Alcazar offers better ride quality, while you feel a bit of body roll at higher speeds.

The length is of course longer and you feel that from behind the wheel. So body roll does creep in and is a very definitive difference between this and the Creta which is a lot sportier. The lateral movements are not evident all the time but high speed lane changes and sharp bends, make you feel it. But it does not take away from the comfort factor too much because the ride quality covers quite aptly. It is superior to the Creta and I have to say that is the USP on the Alcazar. In fact, it’s there with its segment rivals and yes it makes life easy for rear passengers as well. 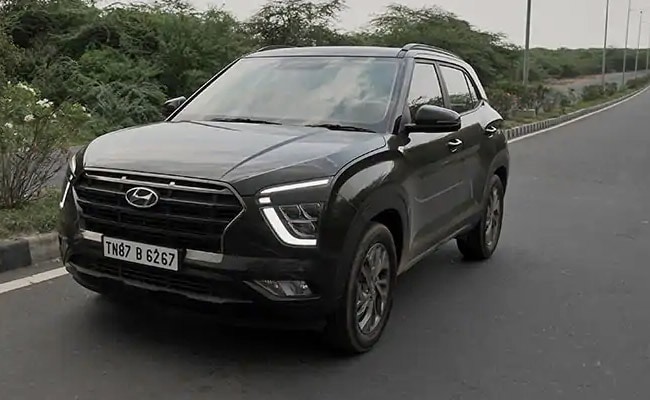 The Hyundai Creta is the sportier SUV to drive, between the two. 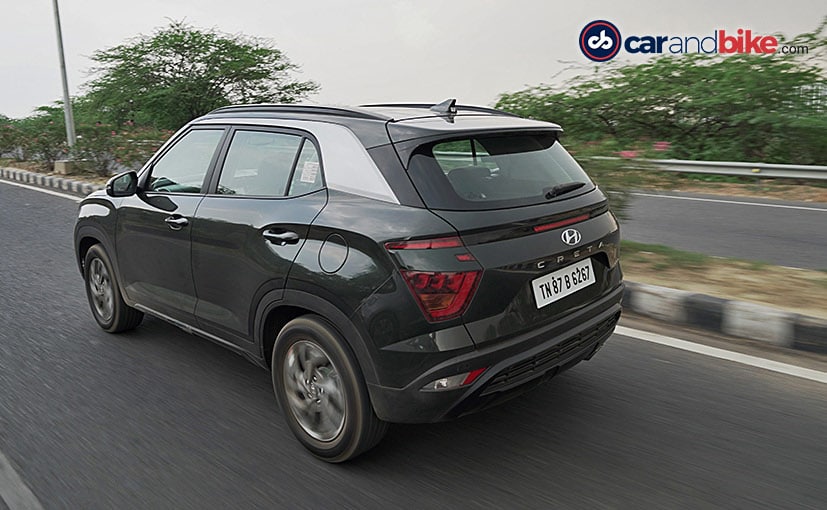 The suspension set up on the Creta is on the stiffer side and the steering geometry complement that sporty character with ample feedback.

The Hyundai Creta does give you a sportier driving experience, especially when you compare to the Alcazar. If you want a car that’s more fun to drive and you are more oriented towards that, you got to pick the Creta. None of the powertrains feel less on power, but the 1.4 Turbo is the punchiest of the lot and the paddle shifts only help. The suspension set up too is on the stiffer side and the steering geometry complement that sporty character with ample feedback. If anything, the steering could have been a wee bit more responsive off the centre. Again, we quite like the suspension setup for how it brings a good balance between ride quality and handling. You don’t often feel that thud, it’s supple at low and moderate speeds and body rolls are contained to quite an extent. 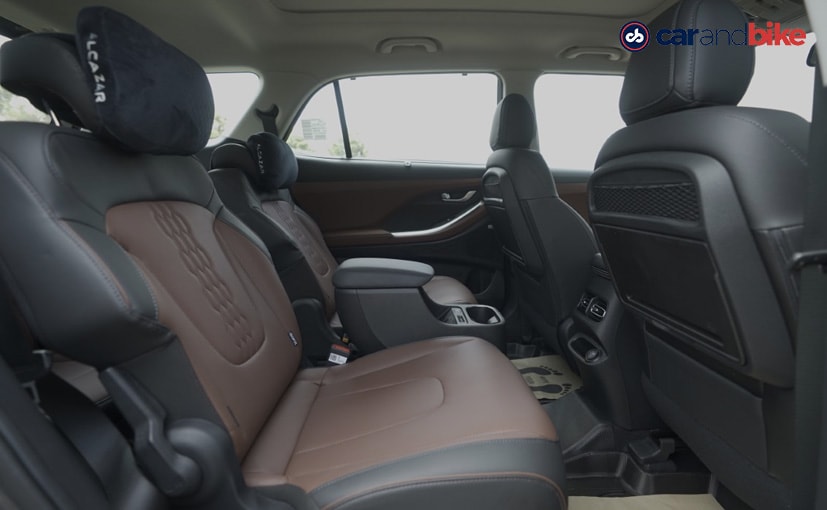 There is a sizeable difference in the cabin space and the six-seater captain seats snug you well.

Well! At first, you won’t feel how big this cabin is, but just hop inside after Creta’s and you’ll get your head around that sizeable difference between the two. And we much like this- the six seater with second-row captain seats layout. The seats are really comfortable and you get a fixed central console that offers features like a wireless charger, cup holders and more storage space. Other features remain same like the sun-blinds, comfortable cushions on the headrest air-con vents and rear charging points among others. You can of course adjust second-row seats and backrests and make more room for all passengers, especially those in the third row. Same adjustment option is available on the seven-seater Alcazar as well.


Speaking of the third-row, getting in and out is bit of a task thanks to the narrow door-well and it’s not an ideal place for adults for long hours. You sit knees up and legroom isn’t great either. So Yes! Even here it’s best suited for kids or teenagers in the family, like other three-row SUVs. The boot space is a bit compromised with all seats up. Good enough only for a suitcase and a couple of dufflel bags at best, but folding third-row seats gives you 146-litres more boot space and so then it can gobble up more than the Creta does. 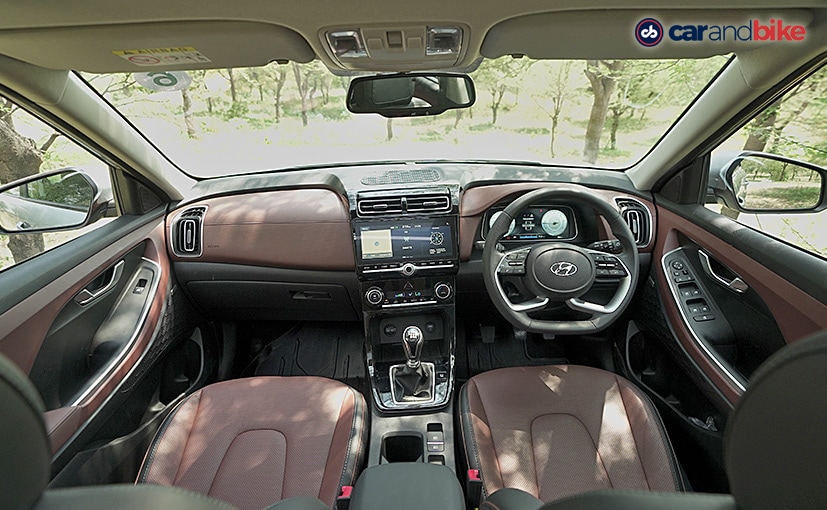 The cognac brown dual-tone interior of the Alcazar feels more premium and gets a classier instrument cluster that also offers lane-changing monitor. The Creta misses on this feature.

Now the Hyundai Alcazar also has a premium positioning than the Creta and that reflects quite evidently in the way both cabins are executed. Though design largely remains same, the cognac brown dual-tone interior of the Alcazar comfortably supersedes the two-tone black and greige interior of the Creta’s. The piano black highlights and subtle chrome touches go better as well with the Alcazar and overall it definitely feels more upmarket of the two. 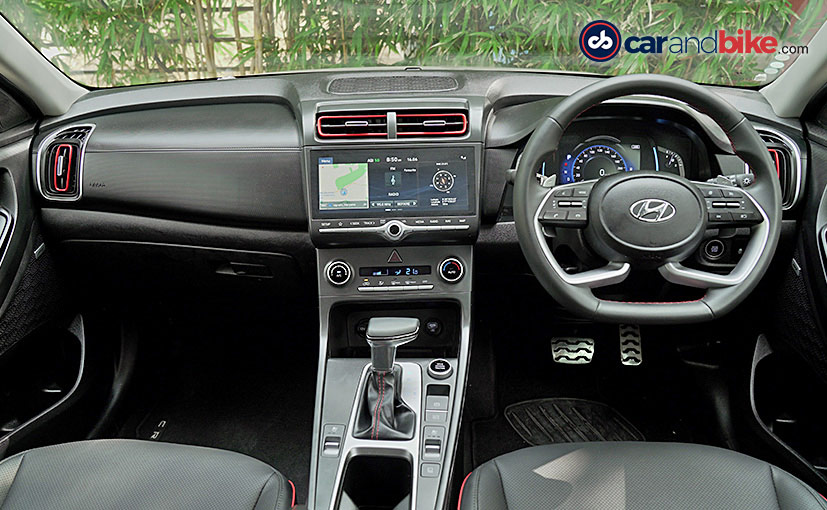 On the inside, both models are  quite evenly matched in terms of layout and features.

Both SUVs are evenly matched in terms of features and don’t fall short in any wat for their respective segments. The 10.25-inch touchscreen infotainment system supporting Apple CarPlay, Android Auto and the BlueLink connected car tech is the same unit in both models and receives over-the-air (OTA) updates as well. Top-end trims in both variants get features like 64 colour ambient lighting, voice commands, power adjustment for the driver seat, an eight-speaker Bose surround sound system, front ventilated seats, electric parking brake, air purifier and a 10.25 instrument cluster with multiple displays among others. Now a lot of these features are standard across variants on the Alcazar, save for the front ventilated seats, electric parking brake and air purifier which the base manual variant doesn’t get, while the base variants of the Creta feel skimmed off. Also, the digital instrument cluster in the Alcazar looks classier and both pods also double up as lane-changing monitors when you turn on side indicators, a safety feature Creta misses on. 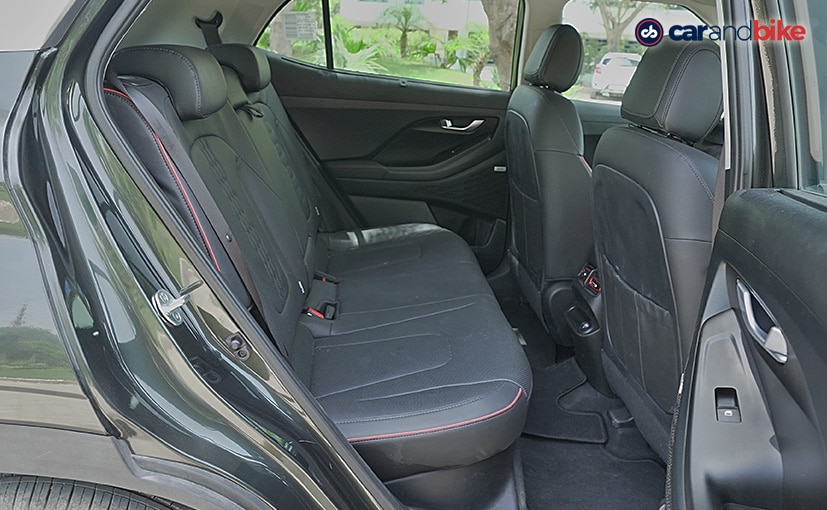 The Hyundai Creta is a five-seater compact SUV.

Other than that, both models fare equally on safety front as well and get driver, passenger and side + curtain airbags along with a host of driver aid features like electronic stability control, vehicle stability management control and hill start assist among others.

Well finally! It all boils down to variants and pricing and it is the most crucial differentiator, as the prices of the Creta 1.5 petrol pretty much tops at where the Alcazar enters the market. 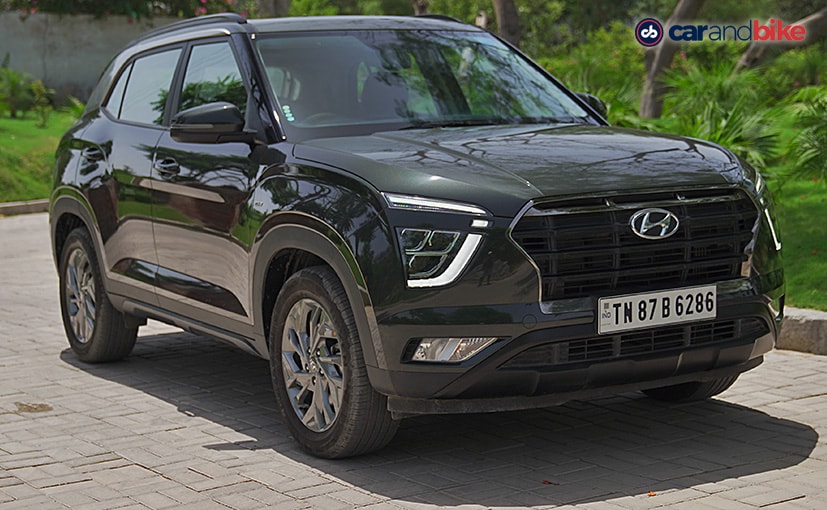 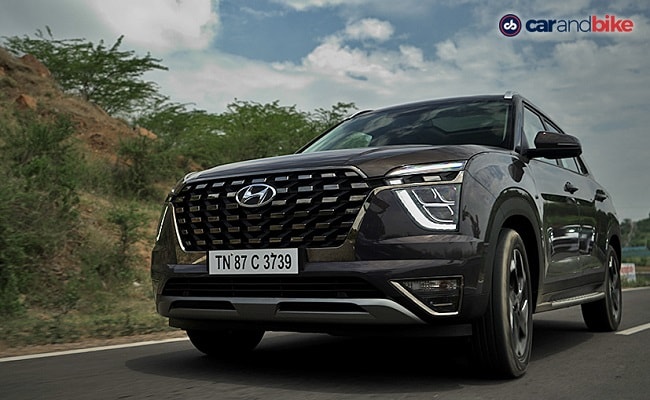 Ex-Showroom prices for the Hyundai Alcazar begin at ₹ 16.30 lakh.

The Hyundai Alcazar is offered in three broad variants- Prestige, Platinum and Signature divided among two engine options and gearbox combinations. Ex-Showroom prices for the Hyundai Alcazar 2.0 diesel begin at ₹ 16.30 lakh while top at ₹ 20 lakh. The Alcazar 1.5 diesel starts at ₹ 16.53 lakh rupees and tops at ₹ 20.15 lakh. 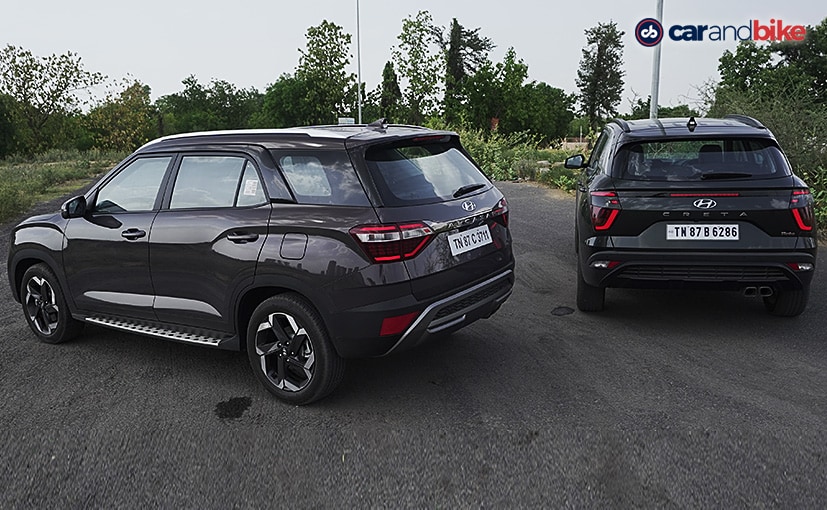 While the Creta is better suited to urban individuals who want and sportier edge to their drive, the Hyundai Alcazar is more of a family mover.

So Yes! Both models cater to different buyers. While the Creta is better suited to urban individuals who want and sportier edge to their drive, the Hyundai Alcazar is more of a family mover. The Creta does give you more options on variants and powertrains and undercuts the Alcazar by a good 6.30 lakh as well. But for that amount, the Alcazar gives you that “badi gaadi” feel.