Home Top Stories How A Truck Driver Averted A Crash After Brake Fails At Toll... 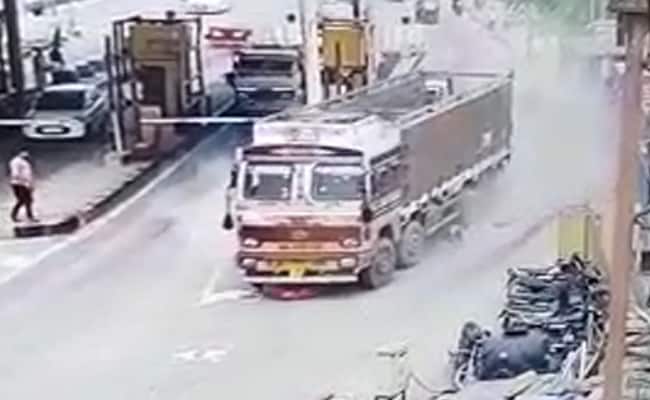 A truck heading towards a toll plaza in Uttar Pradesh almost crashes but the driver quickly averted an accident by getting back control of the vehicle in seconds, a video shows. The truck was on the Dadri-Luharli route when the vehicle’s brake malfunctioned. The video of the incident was shared on social media and shows the truck heading towards the toll plaza. The truck is seen swerving from the centre of the road to the corner most lane of the toll booth. Despite two vehicles in front, the truck proceeds to move ahead.

The clip then shows the truck driver nudging past the cars in a bid to prevent a collision and driving the vehicle to the edge of the road knocking out some sensors and dividers in the process. This timely intervention by the driver ensured that the smaller collisions broke the speed of the truck, allowing him to bring the vehicle to a standstill, albeit in the middle of the road.

The incident was captured on CCTV.

Accidents at toll plazas are not uncommon. In December 2020, an accident at a toll plaza in Madhya Pradhesh killed five members of a family. The car that the victims were travelling in had collided with an oil tanker parked at a toll plaza near Seoni.

<!-- -->Appropriate physical and medical standards are being formulated, the government said (File)New Delhi: The National Defence Academy (NDA) is being prepared for...
Read more
Top Stories

<!-- -->The Taliban has stressed that women's rights would be respected within the framework of Islam (File)New Delhi: The Taliban, in another diktat...
Read more