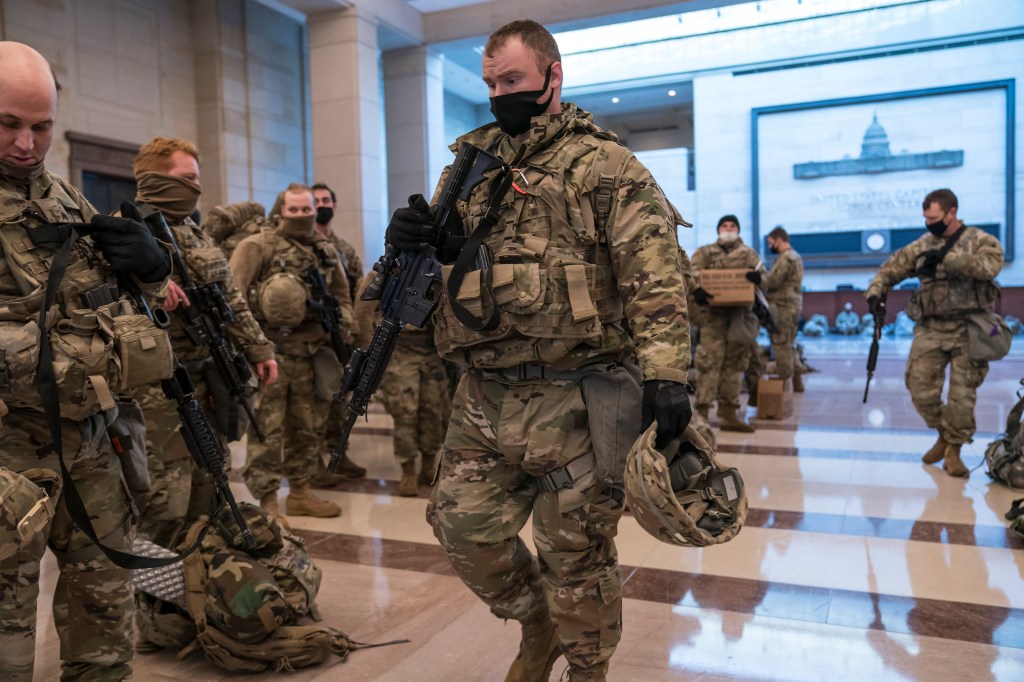 A heavy presence of National Guard members was fanned out across the Capitol grounds as the House prepares to impeach Donald Trump for the second time, as he is charged with inciting the insurrection a week ago.

The House began debate on a rule to proceed on Wednesday morning. There will be two hours of debate on the impeachment articles, with a vote expected in the mid- to late- afternoon.

“This was organized attack on our country that was incited by Donald Trump,” said Rep. Jim McGovern (D-MA), the chairman of the House Rules Committee, who recounted seeing the rioters attempt to break through the doors just outside the House chamber in the Speaker’s Lobby.

“America was attacked and we must respond,” he said.

It will take 218 votes to impeach Trump. Democrats reportedly have 215 votes in favor, and so far five Republicans have said that they will also support impeachment.

“Instead of moving forward as a unifying force, the majority in the House is choosing to divide us further, with only a week to go and his term,” said Rep. Tom Cole (R-OK), who said that last Wednesday’s siege of the Capitol was the “darkest day” he had experienced in Congress. After Congress reconvened that evening, Cole was among the 147 Republican lawmakers in the House and the Senate to vote against certifying the electoral votes for Joe Biden and Kamala Harris.

News networks are providing coverage throughout the day, with CNN taking down a paywall for a free livestream. Broadcast networks also are planning special reports.

If the House passes the article of impeachment, Trump will be the first president to be impeached twice. With just a week left in his term, the question is whether the Senate can hold a trial by the time that Trump’s term ends at noon on January 20.

On Tuesday evening, the House adopted a resolution, 223-205, calling on Vice President Mike Pence and the cabinet to invoke the 25th Amendment to remove Trump. In a letter to Nancy Pelosi, Pence said that he would not do so.

A year ago, the Senate was about to start a trial of Trump on the House’s first impeachment on charges of abuse of power and obstruction of Congress. That impeachment was over a July 25, 2019 phone call in which Trump pressured the president of Ukraine to launch an investigation of Biden.

UPDATE, 10:54 AM PT: One of those testifying at today’s House subcommittee hearing on media disinformation was Kristin Danielle Urquiza, the co-founder of...
Read more
Hollywood

Sophia Loren’s earning rave reviews for her comeback performance in “The Life Ahead,” and now the Oscar winner is adding more trophies to...
Read more
Hollywood

The CW announced a slew of premiere dates today, including new dramas Kung Fu and The Republic of Sarah and new seasons of Dynasty, DC’s Legends of...
Read more