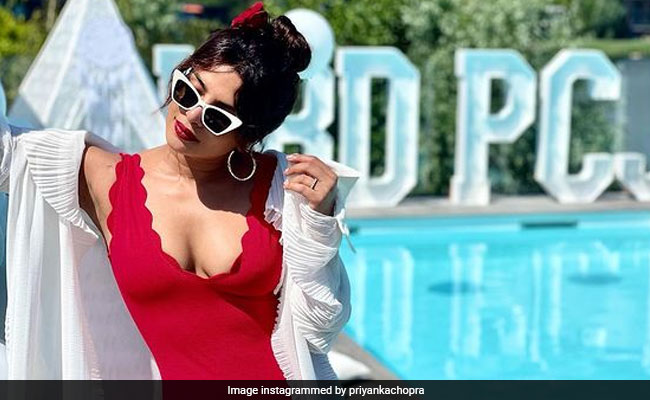 Priyanka Chopra and choose between quality and quantity, paper straw and metal straw but don’t you dare ask her to pick a favourite between Hollywood or Bollywood. Priyanka Chopra recently took the This or That Challenge and shared her version of the viral Instagram trend on Instagram. Priyanka Chopra’s video is actually a shout out to her haircare brand Anomaly Haircare, which ends with an interesting twist. After answering a few questions in the ‘This or That’ Challenge, Priyanka Chopra bumped into a pop up question, which made her hilariously walk out of the frame. The question in concern is “Hollywood or Bollywood,” to which Priyanka’s epic reaction was: “I quit.”

“Some questions are just better left unanswered,” Priyanka Chopra shared her video with the caption. Priyanka Chopra, who is currently in London for the shooting schedule of Citadel, shared this video on Instagram:

Priyanka Chopra is a global icon, who is not only a superstar in Bollywood, but also a sought after name in Hollywood. The 39-year-old actress stepped into Hollywood with 2017 movie Baywatch, in which she played the role of antagonist Victoria Leeds, co-starring Dwayne Johnson. Since then, Priyanka has starred in Hollywood projects such as Isn’t It Romantic, A Kid Like Jake and We Can Be Heroes.

In terms of work, Priyanka Chopra impressive line-up of Hollywood films includes Text For You, Citadel, a wedding comedy with Mindy Kaling and the fourth Matrix movie. Back home, Priyanka Chopra recently announced a road trip movie with Alia Bhatt and Katrina Kaif – it will be directed by her Dil Dhadakne Do co-star Farhan Akhtar.